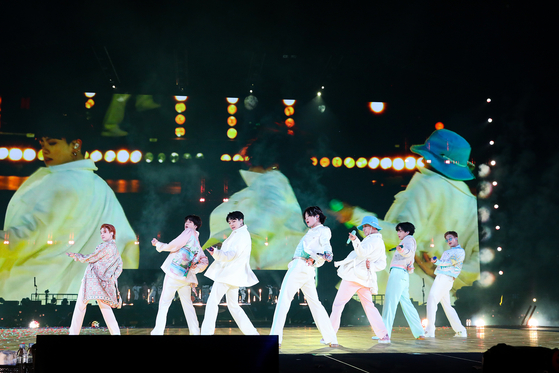 Boy band BTS performs during Sunday’s run of “BTS Permission to Dance On Stage — LA,” its first offline concert in two years, in front of 53,000 fans at the SoFi Stadium in Los Angeles. [BIG HIT MUSIC]


LOS ANGELES — “After two more runs, we’re going back to Korea. [Once we go back] we will probably continue doing pre-recorded performances, but we don’t want that. We want to be back here again. Let’s have one more concert in our dreams tonight. We love you, and thank you.”

This closing statement by BTS member V at Sunday’s second run of “BTS Permission to Dance On Stage — LA,” the boy band’s concert in Los Angeles, was met with the enthusiastic roar of approximately 53,000 audience members.

BTS held its first offline concert in two years at the SoFi Stadium in Los Angeles on Saturday. Thanks to the K-pop phenomenon’s famously loyal fandom dubbed ARMY, a total of around 210,000 tickets have long been sold out. 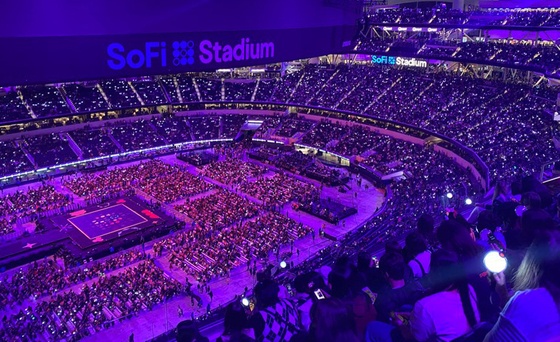 Saturday's run of “BTS Permission to Dance On Stage – LA" at the SoFi Stadium. [YONHAP]


The boy band opened Sunday’s 150-minute long concert shouting that it “prepared a truly crazy night for ARMY” and started with its 2020 song “On.”

The highlight of the show was BTS’s megahit “Butter,” this year’s longest-reigning No. 1 song on the Billboard Hot 100 chart. For the performance of “Butter,” American rapper Megan Thee Stallion, with whom BTS released a remixed version of the song in August, made a surprise appearance. 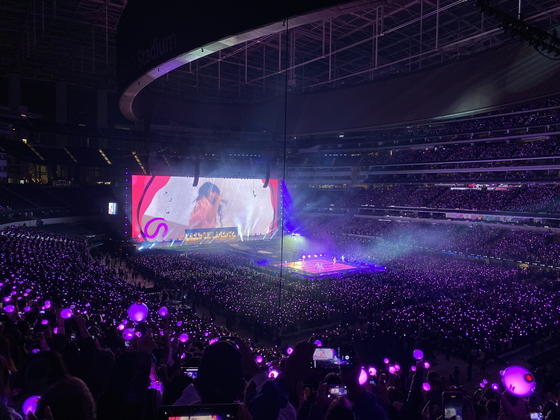 American rapper Megan Thee Stallion, who dropped a remixed track of “Butter” (2021) with BTS in August, made a surprise appearance during Sunday’s concert. [YONHAP]


“Coming to LA in the middle of a pandemic and performing while listening to the cheers and support of ARMY filling up the SoFi Stadium — all this will become such a large part of my history and memories,” said member J-Hope to the crowd after the final song. “I hope this moment becomes a highlight in your lives and memories too.”

“For the past two years, we've performed without fans, just in front of a camera,” said Jimin. “Looking at you guys, I feel like I’ve gone back to seven or eight years ago. I’m honored and moved that all of you waited for us.”


Jin appeared on stage with the hairstyle of the infamous “robot doll” from the hit Netflix Korea series “Squid Game” to make fans laugh.

“Look around you, isn’t it like a movie?” Jin said. “I think we are creating one big movie with you guys, and I will do my best throughout this movie. It’s a movie that we’re going to make for the rest of our lives.”

“We did not include any individual performances for this concert because we wanted the audience to fully focus on all seven of us,” said Suga. “It was so much fun for us. Thank you, and we love you.”

Although BTS was unable to meet fans in person over the past two years due to the Covid-19 pandemic, it continued making history. The band won three awards at the American Music Awards including Artist of the Year, then received a Grammy nomination for the second consecutive year, all in the past month alone. 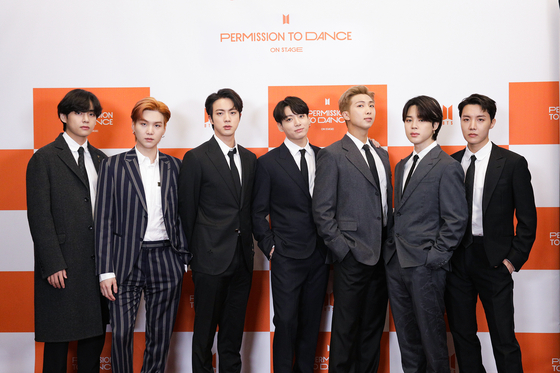 
“We are grateful that we have a wall to jump over and something to challenge us,” said Suga regarding BTS’s Grammy nomination, during a press conference held prior to the Sunday concert. “We hope we'll be able to jump over that."

“I do think it would be great to receive [a Grammy] since it’s an award we’ve never received before,” added Jin.

BTS was also asked about the surge in anti-Asian racism and hate crimes in the United States that has become prominent since the outbreak of the pandemic.

“We feel a lot of barriers while we go about our activities abroad,” said the band’s leader RM. “There’s a lot of aspects that we can’t explain in words or aren’t clearly visible. But we are honored that our music has become a source of strength for Asians across the world. We will continue speaking up against anti-Asian hate as much as we can.”