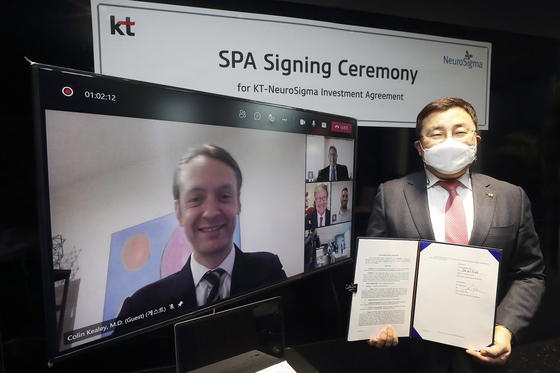 
Telecommunications and major tech companies are jumping into the digital health industry, making aggressive investments in new technologies and related start-ups to take the lead in the market.

The digital health care market is a growing multidisciplinary field that uses the latest advancements in digital technology to treat and manage diseases.

KT said on Wednesday it has invested $5 million in Los Angeles-based NeuroSigma, whose digital treatment for attention deficit hyperactivity disorder (ADHD) has been approved by the U.S. Food and Drug Administration (FDA). The percentage purchased has not been disclosed by KT.

NeuroSigma's Monarch external Trigeminal Nerve Stimulation (eTNS) System, was developed in 2019 as an alternative to drug treatment of ADHD. It is a mobile phone-sized device that when attached to a patient's forehead, sends a therapeutic electrical pulse to the brain that helps regulate parts of the brain regulating attention, emotion and behavior.

"We are looking into expanding synergy in the digital cure market, and this will mark KT's official launch into the global market," said KT.

Rival telecom companies are also competing in the race.

SK Telecom upgraded the Care8 DNA genetic health analysis service in January, after introducing the technology in September 2020 along with local health care company Invites Healthcare and medical devices manufacturer Macrogen. For a monthly payment of 9,900 won ($8.41), users can get detailed analyses about their health based on the DNA samples they send.

LG U+ is aiming to care for Alzheimer's patients digitally.

In October, it signed an agreement with LG Electronics and local digital brain cure company Rowan to co-develop a set of digital programs and content to prevent and manage Alzheimer's disease. The telecom company also signed with rehabilitation company m3solutions in April to help the rehabilitation of Alzheimer's patients through digital content.

The digital health care market has been gaining momentum worldwide, including in Korea. According to Global Market Insights, the market size exceeded $141.8 billion in 2020 and is estimated to grow over 17 percent each year to reach $426.8 billion by 2027, driven by the growing popularity of health technologies.

The Korean government jumped into the race earlier this year, announcing the development of the My Healthway app in February to allow people to see all their health records in one service. The platform is currently being developed and the government aims to make in available in 2022.

Tech companies have been quick to adapt to the market since earlier on.

On Monday, Kakao founded a "company in company" to operate the digital health care businesses and appointed Hwang Hee, a former professor of pediatrics at Seoul National University Bundang Hospital, as the CEO. Kakao explained that a company in company is basically a division within a company but with maximum independence in management and financing from the headquarters.

Kakao units has not been named and it is not incorporated.

Last month, the company signed a 15-billion-won deal to buy a major stake in Humanscape, a local health care company.

Naver is preparing for investment in health care big data companies in Korea.

"There are diverse technologies that are ready for immediate use in various fields, but many of them are failing to become commercialized due to legal issues," said a spokesperson from the Korea Biotechnology Industry Organization.

"The idea of digital health care needs to be narrowed down and related laws — such as insurance and approvals — must be improved so that the Korean industry can truly thrive."