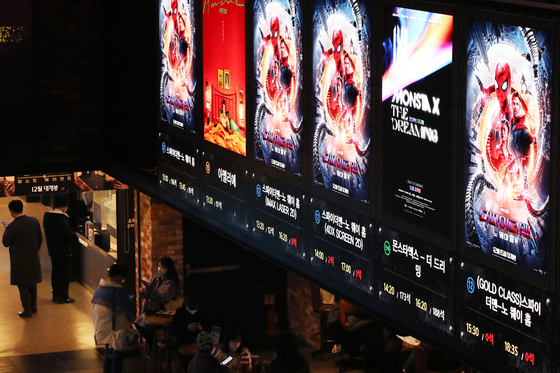 
Marvel superhero blockbuster “Spider-Man: No Way Home” exceeded 5 million in ticket sales since its release in the local box office on Dec. 15.

According to its distributor Sony Pictures, as of 7 a.m. Tuesday, the accumulated number of moviegoers for the film was 5.01 million. It’s the first time any film released in Korea has surpassed the 5 million mark since the Covid-19 pandemic began.

The year 2019 marked the heyday for the local box office as five films — “Extreme Job,” “Avengers: Endgame,” “Frozen 2,” “Aladdin” and “Parasite”— all surpassed the milestone of 10 million in ticket sales. However, since the outbreak of Covid-19 and restrictions on movie theaters, the highest ticket sales recorded were 4.75 million for “The Man Standing Next” (2020).

Featuring Tom Holland as Spider-Man, “Spider-Man: No Way Home” marks the last of a trilogy that began with “Spider-Man: Homecoming” (2017) when Sony Pictures’ Spider-Man entered the Marvel Cinematic Universe (MCU).