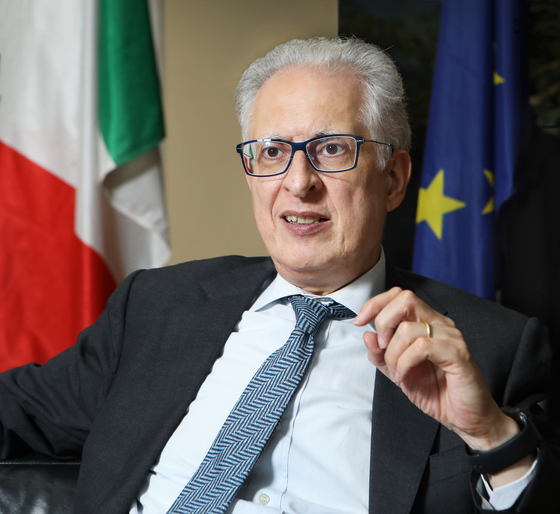 Ambassador of Italy to Korea, Federico Failla, speaks with the Korea JoongAng Daily on July 23 at the Italian Embassy in central Seoul. [PARK SANG-MOON]

As the sole survivor among the Italian medical volunteers who sailed to Korea following the war’s 1950 outbreak, Gianni Riboldi still carries painful memories of his time here.

“Between Seoul and the hospital I saw despair, misery and refugees who fled the war in search of help,” Riboldi, now 94, recalled recently.

While Italy did not send armed forces to the conflict, 128 Italian doctors and nurses volunteered to help the wounded, with the first of them arriving aboard an American Navy vessel that landed in Busan on Nov. 16, 1951.

“I decided to serve as a volunteer in the Military Corps of the Italian Red Cross [CRI] because I knew [of] a humanitarian mission of the CRI […] and I immediately wanted to join this initiative to help the suffering populations in those lands so far away,” Riboldi said.

Situated at the site of what is now the Usin Elementary School in western Seoul, Field Hospital No. 68 was packed with 200 hospital beds, patients from all over the world and 128 Italian doctors, nurses and officers. 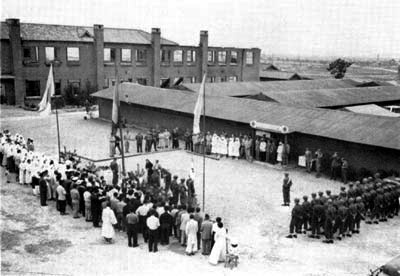 Field Hospital No. 68, also known as the Italian field hospital, during the Korean War. [EMBASSY OF ITALY IN KOREA]


“The hospital’s primary task was to provide assistance to the local civilian population — no question was asked about the person’s background, whether they were from the North or South,” said Federico Failla, the Italian Ambassador to Korea. “The field hospital was fitted with a clinical analysis unit, a diagnostic-radiological unit, two surgical wards, a pharmacy and a pediatric center. During the war, it carried out over 230,000 treatments.”

Riboldi was 25 years old when he arrived in November 1951. He served for nine months, first as a general assistant and then in the hospital’s radiology department.

“My memories related to the war were all very sad, [but] I remember gathering children from the suburbs of Seoul and taking them to the hospital to help them and refresh them up,” he said. “They were all refugees.” 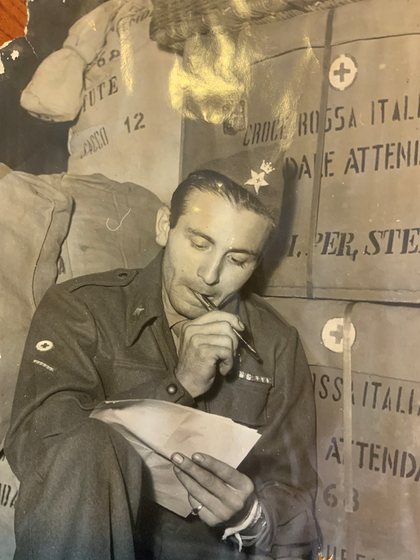 Gianni Riboldi, writing a letter to a friend during his service in Korea at the Italian field hospital during the war. [GIANNI RIBOLDI]

Setting up the hospital under the U.S. 8th Army Command, the Italian doctors and nurses provided around-the-clock medical, ophthalmic, dental, pneumological and emergency care, along with specialized surgeries. The Italian Red Cross records note that at least 17,000 X-rays and 8,400 clinical analyses had been taken at the hospital.

And although the war ended in 1953, the Italians stayed on.

“The war ended, but the consequences of the war did not stop immediately,” Failla said. “It was a tragic period. The hospital felt the need to stay there longer and closed on Jan. 17, 1955.”

The Italian field hospital was the first of its kind dispatched by Italy — which was not then a United Nations member — since World War II. The ambassador said the deployment was an opportunity to not only answer the call for aid from Korea, but also for Italy to show its commitment to values the Italians swore to at the end of the world war.

“In our constitution in 1948 we declared our commitment to ‘repudiate war as an instrument offending the freedom of other peoples and as a means for settling international disputes,’” said Failla.

Memories of the atrocities of World War II were fresh on the minds of some Italians who had sailed across the oceans to land in Busan in November 1951.

“My father, Antonio Santoro, sergeant major of the Italian Red Cross and a non-commissioned officer in the Logistics and Security Unit of the Italian Army had served in the army in Africa and Europe during World War II,” said Michele Santoro, a former chief warrant officer of the Italian Army who is now the Asia and Middle East manager of DICE International Security Services. “He recalled his time in the Korean War as the most striking [among his wartime experiences].” 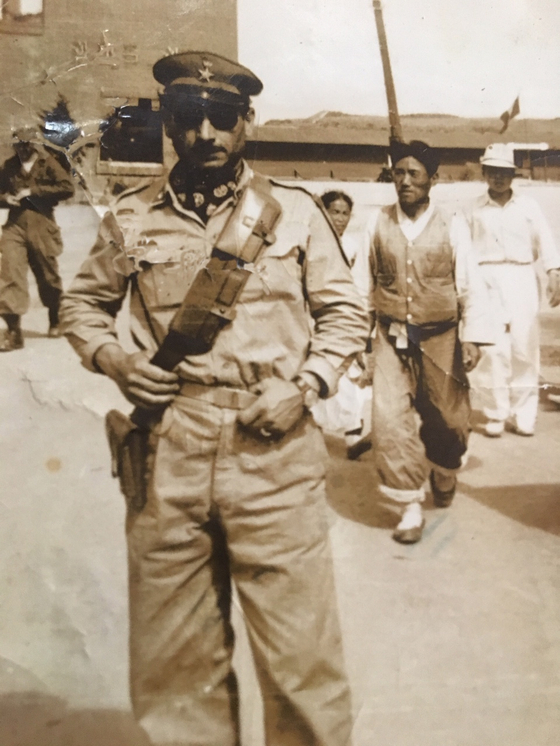 When he returned to Italy, Michele Santoro was just 6 years old. Perhaps too young to remember all the details of his father’s stories, Santoro said he still recalls one of them vividly.

“He often remembered the serious railway accident on Sept. 17, 1952, along the Incheon-Seoul railway line,” Santoro said, referring to a tragic derailment that killed at least a dozen passengers, according to newspaper stories at the time. The railway was Korea’s first, connecting Seoul and Incheon. The train derailed after an explosion reportedly occurred in the engine room.

“The medical and logistics staff actively participated in the rescue operations and assisted over 160 wounded in the 68th Italian hospital of the Red Cross,” Santoro added. “On that occasion he was struck by the strong will of the citizens who, without any fear for their own lives, actively helped with the rescue.”

Sergeant Major Santoro died in 1993 at the age of 81. But the Santoros’ ties with Korea didn’t stop there.

“I visited Korea in 2018,” Santoro said. “Korea possesses an extraordinary people and those who arrive in the country discover a unique world of courtesy, an almost maniacal respect for the guest, order and cleanliness, respect for nature and for life.” 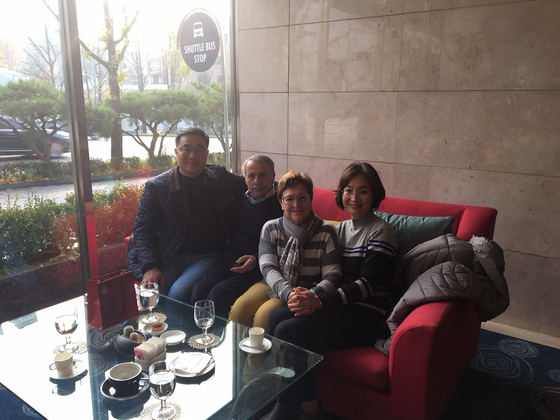 Michele Santoro, son of late Sergeant Major Antonio Santoro, who served at the Italian field hospital from 1951 to 1954, far left, with former Korean Military Attache to Italy Hwang In-gook, second from left, and their wives during their meeting in Korea in 2018. [MICHELE SANTORO]

The Italian Embassy in Korea in 1989 erected a monument to remember the service of the 128 Italians who participated during the war, at what is today the Usin Elementary School. Annual commemorations have been held at the school, although the Covid-19 pandemic caused this year’s to be canceled.

“I was invited to the commemoration last year and I saw that people still very much remembered, and there was still much gratitude for the service. It was quite touching,” Failla said. “This year, in order to commemorate the 70th anniversary of the beginning of the Korean War, Prime Minister Giuseppe Conte has addressed a video message to the Korean people as a demonstration of friendship and long-lasting solidarity between the two countries.”

The Italian discovery of East Asia dates back as early as the 13th century, Failla noted, with Marco Polo’s famous travels from Europe to Asia along the Silk Road. He was followed in subsequent centuries by Italian missionaries.

“The bilateral relations between Italy and Korea are excellent today, too,” he added. “Our bilateral trade was 10 billion euros [$11.8 billion] last year. The number of Korean visitors to Italy reached 1 million, and Korea has confirmed its position as the highest consumer per capita in Asia of Italian products.” 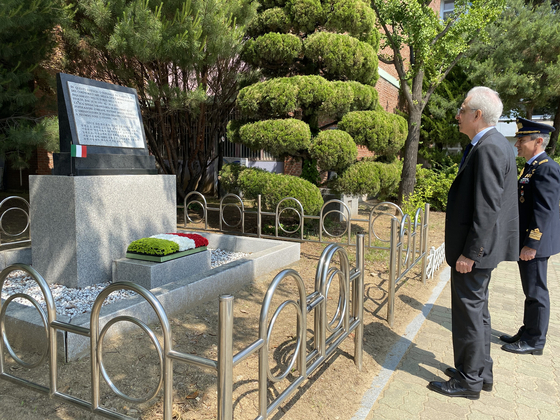 Ambassador of Italy to Korea Federico Failla paying tribute to Italian doctors, nurses and officers who served during the Korean War (1950-1953), at the special monument dedicated to the Italian service established at Usin Elementary School in western Seoul, which was formerly used as the Italian field hospital.[EMBASSY OF ITALY IN KOREA]

“In the last decade, three joint laboratories have been set up: one on membrane technology with Hanyang University; another on fuel cells with the Korea Institute of Science and Technology; and another on preservation and restoration of mural paintings with the Korea National University of Cultural Heritage,” he said.

With the onset of the Covid-19 pandemic from earlier this year, the Korean government has also been sending masks to the veterans and their families.

“They came when Italy was in the middle of the developing pandemic and masks were nowhere to be found,” Santoro said.

“It was for us an unexpected gift, and for this reason it has been appreciated even more.” 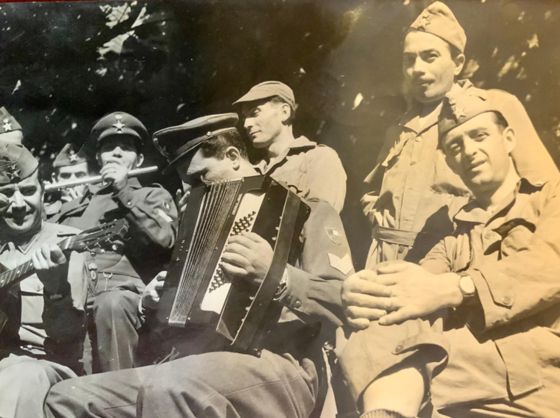 Italian officers during a recreation event in Korea. [GIANNI RIBOLDI] 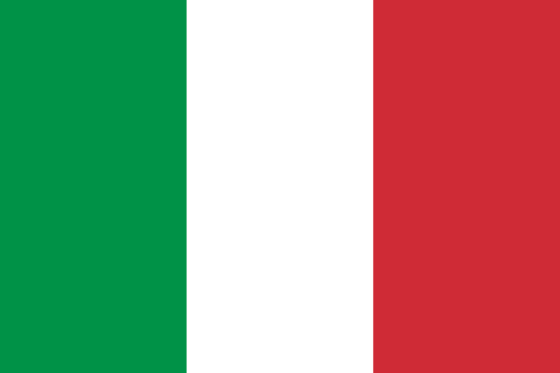 The hospital was a territory hospital under the U.S. 8th Army Command and its primary task was to provide assistance to the local civilian population. The hospital had 200 beds, with a clinical analysis unit, a diagnostic-radiological unit, two surgical wards, a pharmacy and a pediatric center.

According to the records at the Italian Red Cross, the field hospital treated around 230,000 patients, providing them with medical, ophthalmic, dental, pneumological and emergency care, besides specialized surgery.

The hospital has been remodeled into a school, the Usin Elementary School, and an annual commemoration to remember the Italian medical staff members who came to the aid of Korea during the war are held at the school every year.