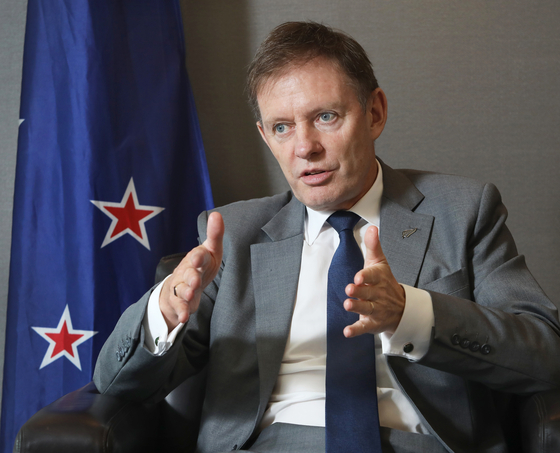 New Zealand Ambassador to Korea Philip Turner speaks with the Korea JoongAng Daily at the embassy in central Seoul on Aug. 13. [PARK SANG-MOON]

Ask any veteran about the worst parts of the Korean War, and you'll get the same answer, says Des Vinten, an 88-year-old New Zealand veteran.

"The worst memory I have is not the war, but for dispatch riders, the extremes of weather," Vinten told the Korea JoongAng Daily on July 29. "Ask any veteran and you will get the same answer. In the winter everything froze, in the ‘wet’ season, roads turned to deep soggy, sticky mud. Small streams and gutters became raging torrents capable of washing wheeled traffic away. I once saw four Americans drowned when their vehicle [another jeep] was overwhelmed by what had once been a culvert of shell cases under a road and had been washed away by a raging torrent of water and mud."

“The government sought volunteers to form what was called the K-Force [also called Kayforce], the expeditionary force to go to Korea, and in around nine days, as many as 6,000 had enlisted,” said New Zealand Ambassador to Korea Philip Turner. “It was a big commitment because at the time, the population in the whole country was just 2 million.”

Six New Zealand navy frigates were also dispatched, the first two of which arrived at the end of July in 1950 and landed at Incheon.

“New Zealand is one of the founding members of the UN, and we believe our best security lies in collective defense with like-minded countries who share our values,” Turner said. “So for over 100 years we have contributed our troops to conflicts when we saw a threat to our values and interests.”

Starting with their contribution to South Africa’s Boer War in 1899, the Kiwis fought in both World Wars and subsequently were dispatched to Korea, Malaysia in the 1950s, Singapore through 1989, the Vietnam War and more recently to parts of the Middle East. Today, New Zealand maintains peacekeeping forces in about 12 nations, including in Korea.

Many of these soldiers participated in more than one conflict; up to 30 percent of Kiwi soldiers in the Korean War had served in World War II, according to the New Zealand Embassy.

“Two of my friends who had previously served in the British Commonwealth Occupation Force in Japan at the end of the Second World War, and who had seen the results of what happened when Japan occupied Korea, decided that they were not prepared to stand by and see something similar inflicted on Korea again by, at that time, another militarily superior force,” said Vinten. “From then on, it was simply a combination of youthfulness, adventure and a sense of fair play that led the three of us to offer our services in whatever way possible and, in our case, that meant enlisting.” 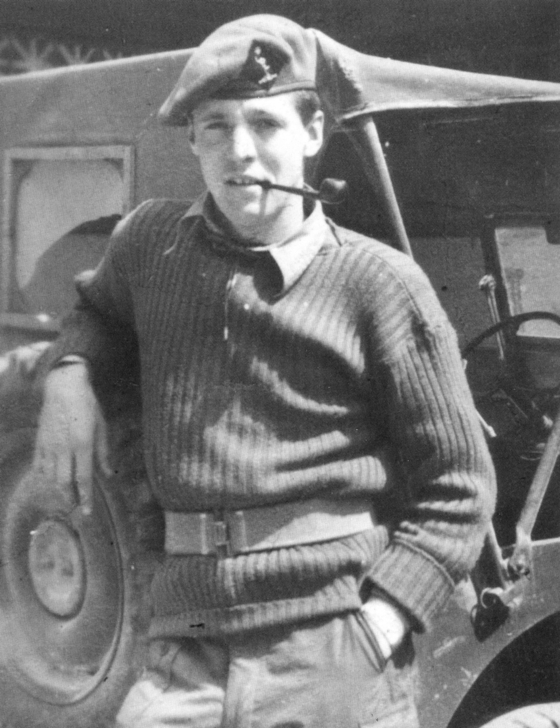 Des Vinten, New Zealand veteran of the Korean War (1950-1953), in this photo taken during his first posting to the Forward Maintenance Area in Seoul during the war. [DES VINTEN]


Vinten arrived in Busan in January 1952. He was soon assigned to the 1st British Commonwealth Division as a dispatch rider, and operated near the Imjin River.

At any hour of the day and night, no matter the weather conditions, he would be dispatched to deliver classified military orders and battle plans to units near the front lines.


“Line and radio messages could in many cases be intercepted by North Korea, so battle plans and similar communications were never sent by this means,” he said. “These matters were regular and irregular, could be day or night depending on what was going on. Weather and road conditions or the time of day were never a factor in when we were required. Getting dispatches through always took priority.” 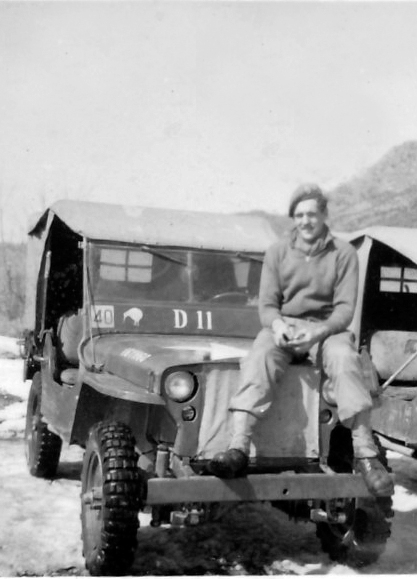 Des Vinten sitting on the bonnet of his jeep. "The 40 on the windscreen was the Tac Sign for 1 Britcom Divisional Signal Regiment, the Kiwi says I am a Kiwi dispatch rider and the vehicle number D11 tells every one I am a dispatch rider and should not be delayed when on the road," he said. [DES VINTEN]


The Kiwi soldiers’ artillery provided critical support to the Australian, British and Canadian forces. Such was the case during the Battle of Gapyeong in Gyeonggi in April 1951, when the Chinese and North Korean offensive reached its peak, trying to break through the United Nations forces to recapture Seoul. New Zealand also played a significant role during the Fourth Battle of the Hook, one of the last battles before the armistice was signed.

Artillery power was of particular importance during the war, according to Colonel Donald Jones, the current defense attaché of New Zealand to Korea, due to the country's mountainous terrain.

“From July 24 to 26, 1953, during the Fourth Battle of the Hook near the Imjin River, the New Zealand artillery was able to inflict some 2,000 to 3,000 casualties to the Chinese volunteer army,” Jones said.

Over the course of the war, the New Zealand forces fired some 800,000 shells, according to Jones.

But they still found moments to unwind periodically, often joined by their siblings across the ocean.

“It is said that whenever the New Zealand soldiers got together with the Australians, there were ‘volleys of hard words, mud, water, old eggs or anything throwable,’ according to T. J. Cottle, a New Zealand veteran,” said Ambassador Turner, quoting from historian Ian McGibbon’s book, “New Zealand and the Korean War” (1992).

“The other UN forces think we are crazy, but actually we are the only troops who have such a strong bond of comradeship, and that’s our way of showing it,” Cottle recalled, according to the book.

“From the time we served as Anzac — the Australian and New Zealand Army Corps — in World War I, we have a very close bond with Australia,” said Turner. “It’s a sibling rivalry, like between hyeong [the Korean word for older brother] and younger brother.” 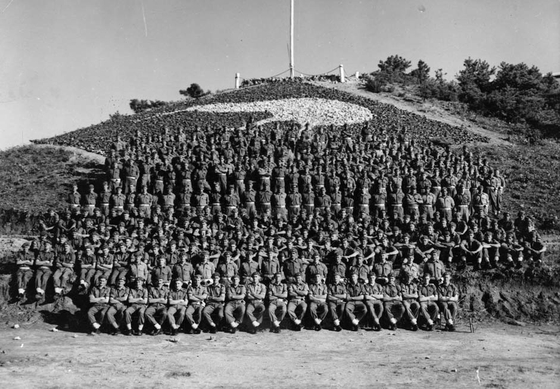 Gunners from the 16th New Zealand Field Regiment pose for a photograph in front of Kiwi Hill at the regiment's headquarters in Korea in 1953. The photo has been provided by Sue Corkill, author of "Korea: A Kiwi Gunner's Story," published by Fern Publishing in 2014. [SUE CORKILL]


New Zealand lost the lives of 33 men to the war. But the Korean War carries a rare legacy, in being able to demonstrate to the surviving soldiers that their service was not in vain.

Some five to six Kiwi veterans regularly participated in the Korean government’s revisit program to return annually before the Covid-19 outbreak, according to the embassy.

Vinten himself came back for the first time some 30 years after the war.

“My first [return] to Korea was with an official revisit program back in the 1980s, and I was reminded of my last words as I boarded a Pan Am Super G Constellation at Iwakuni for my trip home after 18 months of war in Korea,” Vinten said. “They were, ‘If I never see this place again, it will be too soon!’”

The country was drastically transformed, he said. The moment he stepped off the plane, Korean staff members looked like they “just stepped out of the pages of a fashion magazine,” he recalled, the first in a series of shocks. On the ride from the airport to Seoul, he recalled seeing “thousands of lights, where once there were none.”

“I have been back to Korea four times, and each time the feeling and wonderment I have for Korea grows even stronger,” Vinten said, “and my pride in the very small part I played in what stands — where once war ruled — was assuredly worth the effort."

Vinten wasn't alone among New Zealand veterans who said their memories of Korea made them want to return decades later.

“Hapi October, a veteran who had served in the war, and his son sent the embassy a picture of October taken near the 38th parallel line in 1952, asking if we would be able to locate the same place,” Turner said. “And sure enough, we were able to. So when they revisited in 2019, they were able to take a photo at the exact same location.” 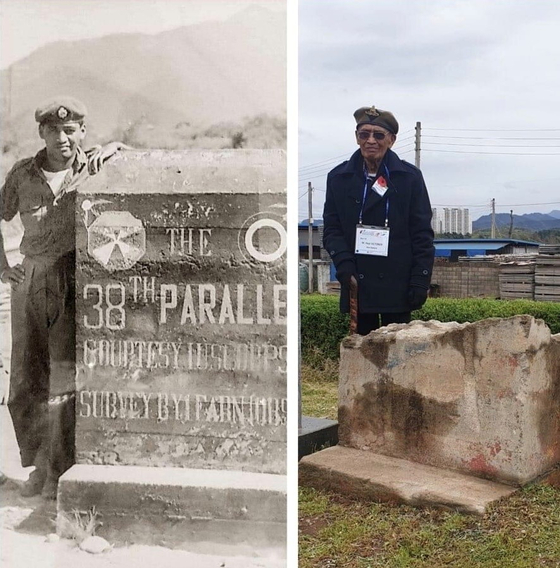 October was so moved by Korea’s welcome during his visit that year that during his meeting with then-Minister of Patriots and Veterans Affairs Pi Woo-jin in Seoul, he gifted her his Maori cloak, a traditional garment made from bird feathers and worn by indigenous New Zealanders. 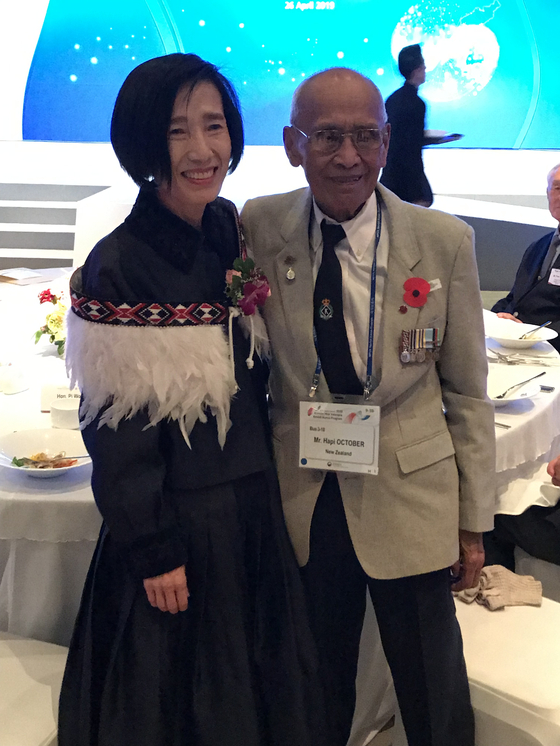 Hapi October, New Zealand veteran of the Korean War, right, with then-Minister of Patriots and Veterans Affairs Pi Woo-jin in Seoul in 2019. [EMBASSY OF NEW ZEALAND IN KOREA]


With many veterans now in their 80s or older, the association of Korean War veterans from New Zealand was disbanded in 2016. Vinten was the last president.

“[It was in] 1976 that the first National Kayforce reunion was held in Wellington and a formal organization of Veterans emerged as the New Zealand Korea Veterans Association [Nzkva],” Vinten said. “From that time up to 2016, the association met every year until […] it was finally decided to shut the Nzkva down because of the reduction of membership brought about by old age. Membership had dropped from 650 in the 1970s to approximately 64.”

They may no longer meet as regularly, but they remain interested in the affairs of Korea nonetheless, especially regarding inter-Korean relations.

“I remember during my first visit, the opinion most often stated in South Korea was overwhelmingly for one Korea [unification],” Vinten said. “Then some years later the opinion was turning toward 50/50, one side opting for a moderate form of unification and the other side favoring two Koreas. The last time I spoke to a Korean in diplomatic circles I was told that unification was off the table since most of the people he spoke to now were convinced that South Korea is, and will always be, better off economically as ‘South Korea.’”

He added, “The correct answer […] can only be given by those that are there.”

Despite the Covid-19 pandemic and subsequent cancellation of most international events, Prime Minister Jacinda Ardern honored several veterans on the 70th anniversary of the outbreak of the war at Pukeahu National War Memorial in Wellington on July 1. 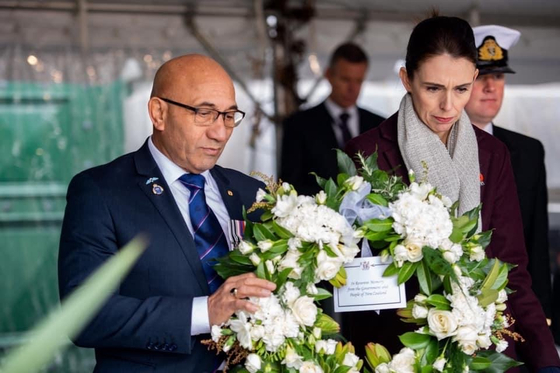 Vinten, who was present at the ceremony, said his memories of the war are not as painful, as he believes their efforts made a difference for the better.

“General McArthur said, in his final address to the United States Senate, ‘Old soldiers never die, they simply fade away,’” Vinten said. “We know the feeling but take comfort from the fact that the memory of what we did in Korea will live on into the future.” 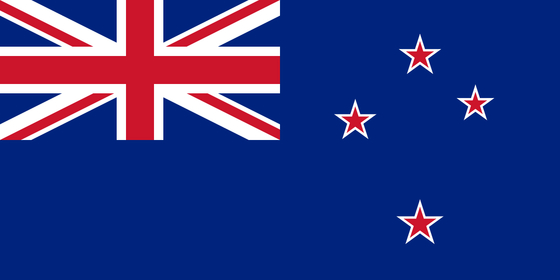 New Zealand
From the outbreak of the Korean War (1950-1953) to 1957, New Zealand deployed to Korea 4,700 soldiers and 1,300 sailors on its six navy frigates. The first two frigates arrived on July 3, 1950. A total of 45 Kiwis died during this period — 33 during the war. The Kiwi soldiers operated with the British Commonwealth forces, often providing artillery support in key battles, including the Battle of Gapyeong in Gyeonggi in April 1951, the battles in the Mount Gowang area in Gyeonggi in October 1951 and the Third Battle of the Hook in today’s North Korea near the Panmunjom area in May 1953. New Zealand military records state that as many as 800,000 artillery shells were fired by the New Zealand forces during the war.