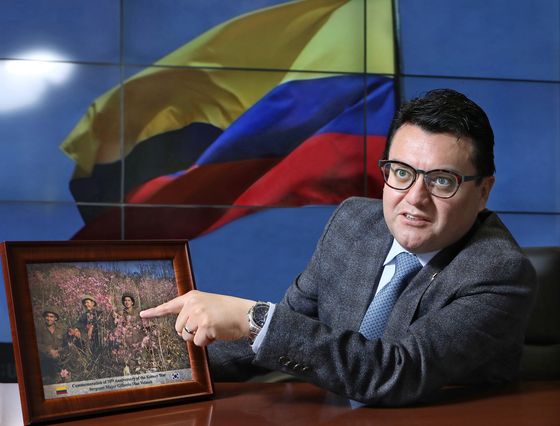 Pointing to a photo taken during the war by Colombian veteran Sergeant Major Gilberto Diaz Velasco, Ambassador of Colombia to Korea Juan Carlos Caiza speaks with the Korea JoongAng Daily on June 29 at the Embassy of Colombia in central Seoul. [PARK SANG-MOON]

'We had to wade through body after body on the ground'

On the night of March 23, 1953, one of the last days of the Battle of Old Baldy during the Korean War, a group of Colombian soldiers found themselves out of ammo after days of heavy artillery shelling from the Chinese forces.

Hearing their commander call for a retreat from the battlefield in in Yeoncheon County, Gangwon, the soldiers made their way back to their reserve posts. But 20-year-old Gilberto Diaz Velasco had a different mission in mind.

“One of my closest friends in the army passed away that night, and I wanted to bring him back with me,” said Sergeant Major Diaz. “But there were so many bodies on the ground, and I couldn’t tell where my friend was.”

Time was not on his side. So Diaz did something that he never thought he could.

“My friend had a mustache,” Diaz said. “So I started touching the faces of the bodies on the ground until I was able to recognize him. I took his body with me.”

Diaz is one of 420 surviving Colombian veterans of the Korean War. He spoke with members of the press during an online conference organized by the Colombian Embassy in Korea in Seoul on June 23.

Colombia sent 5,100 soldiers and sailors to Korea during the war, the only country in South America to answer the call from the United Nations. 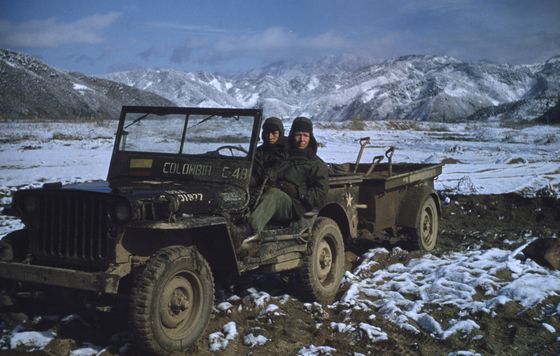 Diaz, right, on a Willys M38, next to a Mexican interpreter. The jeep was a utility vehicle used in the Korean War for attack, command and control missions and for emergency transportation of personnel wounded in combat. [GILBERTO DIAZ VELASCO]


“In June of 1950, the secretary general of the United Nations invited the governments worldwide to an alliance,” Juan Carlos Caiza, ambassador of Colombia to Korea, told the Korea JoongAng Daily. “The alliance was around two principles: The principle of democracy and the principle of freedom.”

The first group of Colombian forces arrived in Korea on the frigate A.R.C. Almirante Padilla on May 8, 1951, and the last group departed on Oct. 11, 1954, according to the Colombian Embassy in Korea.

The Colombian Battalion was attached to the United States’ infantry divisions, including the 31st Infantry Regiment, and took part in Operation Thunderbolt, the Battle of Old Baldy, the Battle of Triangle Hill and the recapture of Geumseong.

“After arriving through Incheon, we were assigned to several groups and patrolled the land to understand its conditions,” Diaz said. “My specialty was the 81-millimeter bazooka. My team’s role was to infiltrate the enemy lines and find out where we can attack with mortars.”

During the Battle of Old Baldy, the Colombian forces were placed on the main line of resistance with American forces. They were later recognized for their valor.

“The Batallón Colombia was operationally ready,” American historian Charles Briscoe wrote on Veritas, a journal published by the U.S. Army Special Operations Command, in 2006. “The battalion’s intense integrated training […] was key to Colonel William B. Kern awarding it a top performance during regimental maneuvers in late November 1952, and again in February 1953.” 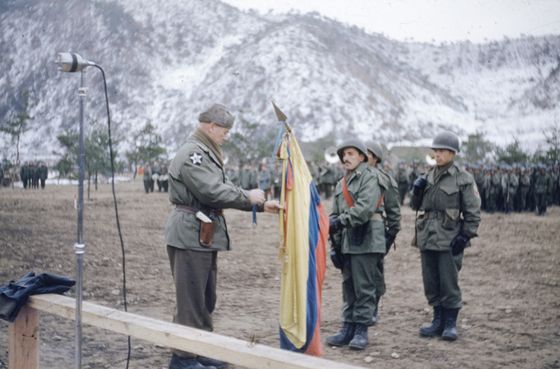 U.S. General James Van Fleet awards the Presidential Unit Citation to the Colombian Flag, in recognition of the heroism and acts of courage displayed by the troops in the Korean War, during a ceremony held Dec. 9, 1952. Lieutenant Edgardo Vallejo carries the standard. [GILBERTO DIAZ VELASCO]


Colombians suffered 140 deaths, with 71 service members missing in action and another 609 injured throughout the war. Their bloodiest battle was the Battle of Old Baldy, during which they lost 95 soldiers and sustained 97 additional injuries, according to U.S. Army Center of Military History.

“The surprise attack during the night of March 23, 1953, was the most tragic moment I recall from my 14 months of time in Korea,” Diaz said. “There were not only army troops on the ground but airplanes in the air with heavy artillery. We had to wade through body after body on the ground. No one who experienced the night and survived will ever forget.”

Diaz, who is now 86, made headlines a few years ago, following a Colombian news story that he had held on to 400 photos — many in color — that he had taken and printed during the Korean War.

“It was fascinating to find out that here was a Colombian veteran with all these photos in color, and the question that we all asked was, how was he able to get them printed at the time?” Ambassador Caiza said.

“A lot of people were traveling from Korea to Japan during the war, so I would ask people who were going to Japan to get me some photo film,” Diaz said. “Once I got them, I started taking the pictures, and would send the finished film to Hawaii, where they would print the photos, then send them to San Francisco, where the soldiers had their P.O. Box address, and from there they would ship the photos to me in Korea,” Diaz said.

“I simply wanted to reflect on photos of the daily life of soldiers during the war,” he said. “I didn’t know that I would end up with pure history in my hands afterwards.” 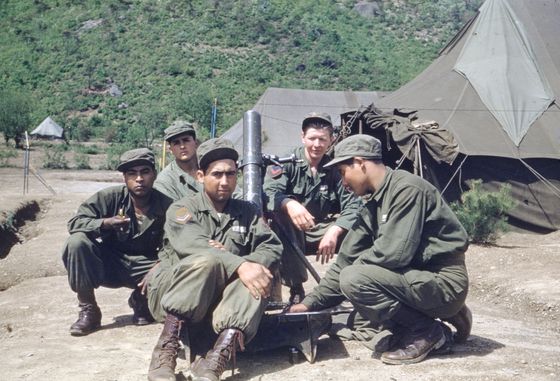 
Colombia’s Ministry of Defense archived the 400 photos, and with them video-recorded explanations of each photo provided by Diaz.

Of these, 200 were published on the website of the War Memorial of Korea on June 26, when the Colombian embassy hosted an event at the war memorial in central Seoul to commemorate the 70th anniversary of the outbreak of the Korean War.

Defense ministers in Korea and Colombia recalled the price that Colombian and Korean forces paid 70 years ago.

“The Colombian forces were placed both on the ground and in the sea to cooperate with the UN Command and the South Korean forces,” Colombian Minister of Defense Carlos Holmes Trujillo said at the memorial event, via online streaming. “A lot of the battles during the war would not have been possible had it not been for the forces from abroad who answered the call from Korea. […] Our brotherhood continues to this day.”

“They came for a country located on the other side of the globe,” Jeong said during the event. “Korea was able to regain its freedom and peace due to the sacrifice of the Colombian veterans. For this we are extremely grateful.”

Jeong said that there are 69 Colombian soldiers who never made it home. The remains of two soldiers listed as MIA have since been found and repatriated.

“They are buried somewhere on the Korean Peninsula,” he said. “We will not stop until they are returned to the loving arms of their families back home.”

The Colombian embassy said it plans to continue building on that bilateral cooperation.

“My goal after the 70th commemoration of the war would be to further improve relations between Colombia and Korea,” said Caiza, the Colombian ambassador. “I would like to see bilateral relations thrive on culture, the free trade agreement as well as innovation and entrepreneurship." 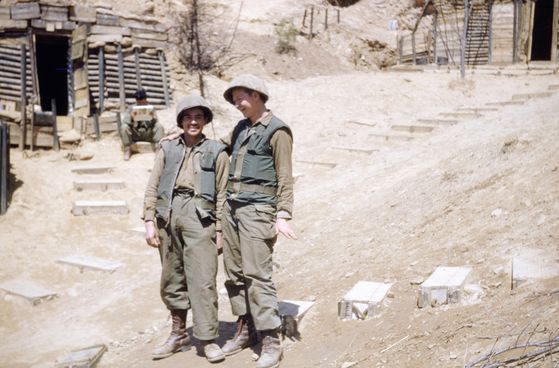 Diaz, right, with his friend Pedro Martinez in the fortified positions of the Colombia Battalion. [GILBERTO DIAZ VELASCO] 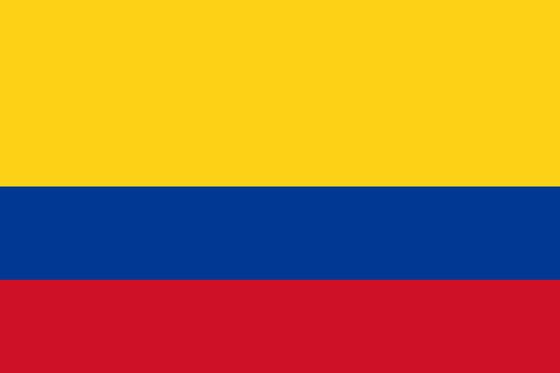 Colombia was the only South American nation to answer the United Nations’ request for military assistance to South Korea at the outbreak of the Korean War in June 1950. The country sent 5,100 soldiers and sailors to Korea from May 8, 1951, to Oct. 11, 1954.

The first group of Colombian forces arrived on the frigate A.R.C. Almirante Padilla at a port in Busan. Assigned to the U.S. divisions and serving with the United Nations Command, the Colombian Battalion engaged in battles including Operation Thunderbolt near the Han River in Gyeonggi and the Battle of Old Baldy, the Battle of Triangle Hill and the recapture of Geumseong, all in Gangwon.

According to the Colombian Embassy in Korea, 140 Colombians were killed in action, 71 went missing in action, 609 were wounded in action and 22 were captured but repatriated.