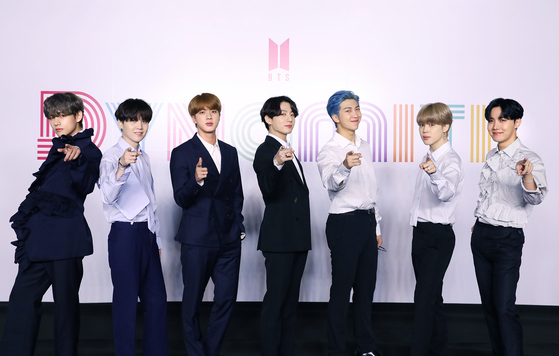 BTS poses for photos at an online press conference held on Friday morning prior to the release of its new digital single "Dynamite." [BIG HIT ENTERTAINMENT]


The world has been united by the global misfortune that is the coronavirus. The members of BTS are no exception, but in these times of difficulty they hope to remedy and recharge people through what they do best: music.

BTS released its new digital single “Dynamite” today at 1 p.m. as the band’s first digital single and as the first worldwide release since its fourth full-length album “Map of the Soul: 7” was released in February. The song is disco dance-pop that is guaranteed to make people want to get moving, released in hopes of lightening people’s moods in a virus-stricken world.

“The message of the song is about happiness and confidence, telling people they should find what they can do and find freedom in dance and music,” said Suga during an online press conference held on Friday morning prior to the song’s release.

“These are times where we all feel like we were running and fell over. This is a song for everyone who feels like that. There’s a part in the song that says ‘Light it up.’ Just like those words, I hope people light up through this song.” 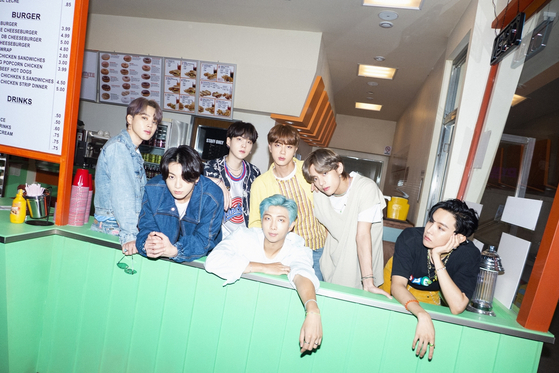 
BTS first announced the news of the new single on July 27, expressing its wishes for the song to be a gift to fans around the world coping with difficulties brought on by the coronavirus pandemic. The band explained that the song was written in English because "English would go better with the song." This announcement was met with both support and dismay from fans, but it was a team decision that came unanimously after listening to the demo of the song, according to members.

“When we first heard this song, we all loved it,” said V. “Just listening to it cheered us up. It was a little different from our songs in the past, and we found that the melody went really well with English when we were recording it. So we all agreed that it would be better off in English.”

“Dynamite” is meant to be a remedying gift to listeners, but it also helped BTS. The band had no plans to drop any music before the release of its next album planned for the end of this year, but coming across such an uplifting song made the group change its plans in the hopes of sharing it with people as soon as possible.

“We called this a recharge project, because that’s what it actually did for us,” said RM. “Everything was so unexpected. We didn’t know what to do and we were angry, powerless. But then as time went on, we got to thinking more about the situation and ourselves. We were given the opportunity to think more about music, which fortunately led to this song ‘Dynamite.’ We tried a lot of new things with this and it’s our brightest song yet. It was a breakthrough for us, during hard times.” 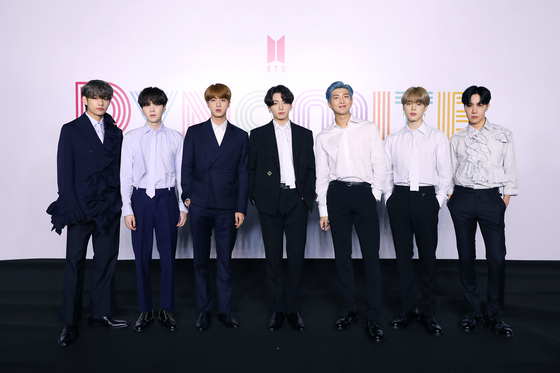 BTS poses for photos for the online press conference held on Friday morning prior to the release of its new digital single "Dynamite." [BIG HIT ENTERTAINMENT]


BTS will be performing the song for the first time on Aug. 30 at the 2020 MTV Video Music Awards (VMA) in the United States. It will be the first time for the band to perform at the VMAs, which is “one of the only awards that we haven’t had the chance to perform at yet,” said Jin.

“As we said, the song itself was a new opportunity and breakthrough for us. So we’re going for new promotional tactics that are different from what we were doing in the past. I think it will be a fun challenge and I hope you look forward to it too,” he said.

"On," the lead track of "Map of the Soul: 7," has been nominated in three categories at the VMAs — Best Pop, Best Choreography and Best K-pop. It was the best selling album in the United States within the first half of this year with 552,000 copies sold, according to a report by Nielson Music, and also the only album that sold more than 500,000 copies.

“Whatever the record and whatever the scores, we’ve always been grateful and feel honored, because it means a lot of people listened to our music and they liked it,” said Jin. “We feel so overwhelmed and fulfilled every single time. A new record will definitely give us the inspiration to develop even more.”

BTS has a busy autumn ahead. The band will appear on MTV's "Fresh Out" today and on the "Today" show on Aug. 24. Two concerts have also been announced for Oct. 10 and 11 titled "BTS MAP OF THE SOUL ON:E." The name "ON:E" implies the meaning of it being a "ONE and only" concert held as an "ONline Edition" according to Big Hit Entertainment. It will be held both online and offline, with limited seats open to audiences in Seoul. Also, the band’s documentary film “Break the Silence: The Movie” featuring the band’s “Love Yourself” and “Speak Yourself” tours will be released on Sept. 10.