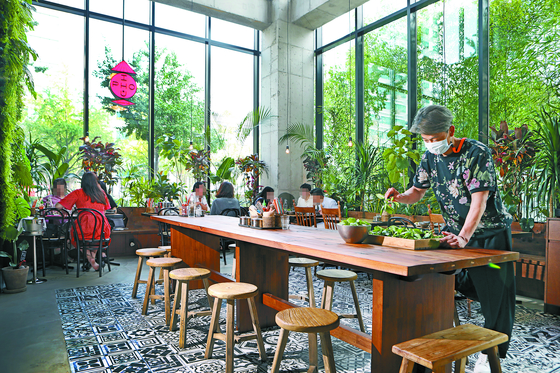 Chef Yim Jung-sik, right, of newly opened I Pho U in Sinsa-dong, southern Seoul, puts herbs in a bowl of pho. [PARK SANG-MOON]

Months after a pop-up, which was first conceptualized in 2017 and saw the clear beef soup gomtang in many different versions, Yim continued to think about what variations he could make. That's how he came up with the version many Koreans know as pho at café I Pho U located on the first floor of the newly opened Hotel Anteroom in Sinsa-dong, southern Seoul.

“What’s served here is something that may not really exist in Vietnam,” said chef Yim, during an interview with the Korea JoongAng Daily. “This place is to provide some exotic ambiance that can make customers feel like they are out dining and drinking in a resort overseas, and the food is something that I was inspired to make through cooking a variety of dishes that I have always been passionate about.” 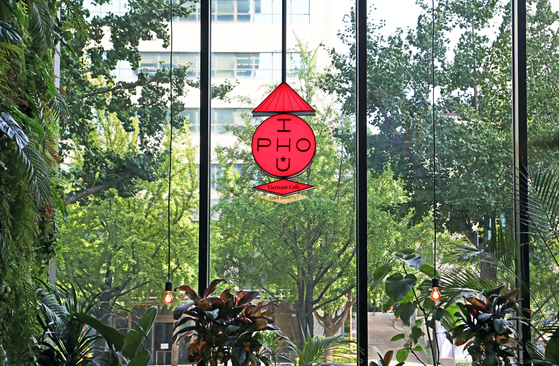 
Through the sporadic pop-ups that lasted until last year, Yim has learned from any mistakes he could make while cooking to serve a large number of people at once, different from what he was used to at fine dining restaurant Jungsik. He still plays a lead role, checking everything that’s served to dining guests at Jungsik, yet continues to find a way to make his culinary dreams come true by introducing different styles of food in different restaurant settings. At the moment, under the group named Gopumjil in Korean, which translates to high quality, he runs restaurant Jungsik as well as Jungsik Café in Seoul and Jungsik in New York.

I Pho U has a high ceiling and is filled with plants and artwork to provide a somewhat exotic and outdoorsy feel. Tables and chairs are wooden to make the vibe more natural and give the diners a feel of nature in spite of being amid the hustle and bustle of Seoul.

Because it is part of the hotel, the cafe opens for breakfast, lunch and dinner to cater to diners that come at anytime of the day. It opens at 7:30 a.m. and closes its doors at midnight. 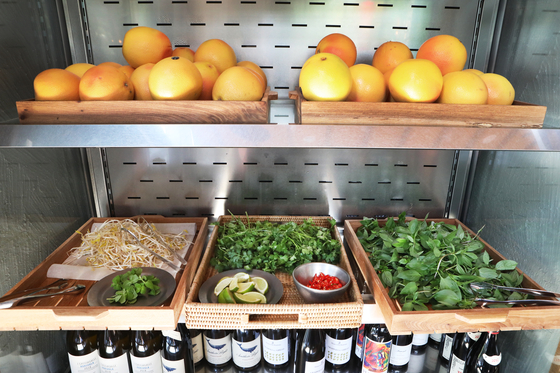 The fresh herb bar at I Pho U. [PARK SANG-MOON]


While most of the dishes available for breakfast are soup-based, more items are added to the menu for lunch, and charcoal-grilled meat is available for dinner. Prices of pho range from 16,500 won to 29,000 won ($14 to $23), depending on what ingredients you choose to add. Some of the most popular options are clam pho which offers a lighter, more refreshing taste and oxtail pho which has a deeper flavor. It is possible to add clams to any other pho available on the menu. There is also is a fresh herb bar where you can add as many herbs, like cilantro or basil, to top on your bowl of noodle soup as your heart desires.

As it is a cafe, it also serves a variety of drinks ranging from tea, juice, coffee drinks to alcoholic beverages like cocktails, wine, beer and some Vietnamese liquor. Sweet options to end a meal or to accompany your drinks are also available, such as cakes, tarts and ice cream. Since the cafe is still in its soft opening period, new savory and sweet menus are constantly being added. Some of the menu items are also in the process of being made into meal kits for those wishing to dine at home. 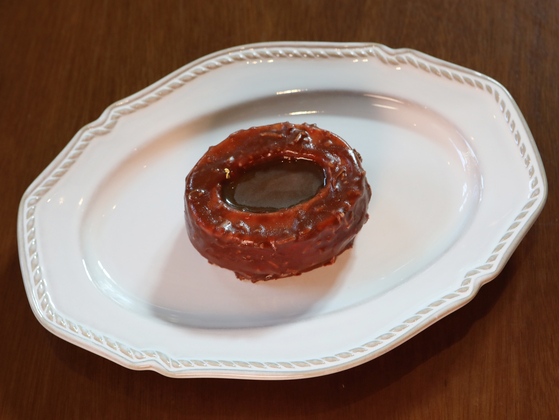 A chocolate-covered dessert at I Pho U. [PARK SANG-MOON]


Yim has stayed out of the public eye after filing a complaint against his wife to the prosecutor's office in February. He claims his wife embezzled earnings for the restaurant brand Pyunghwaok, which they built together. His wife then filed for divorce to end their six-year-long marriage. The cases are ongoing.

Yim sat down for a interview with the Korean JoongAng Daily at I Pho U on Aug. 18. The following are edited excerpts.


How is the I Pho U café different from other food and beverage spots you have run so far?
Since this is part of a hotel, we need to do all-day service including breakfast, lunch and dinner without any breaks in between. So we wanted to provide everything a hotel restaurant should have but with a twist. I wanted people to feel like they are on a vacation in a resort. So for breakfast, we are doing a tray service. We are also working on serving Banh Mi (Vietnamese-style sandwiches) as well so that breakfast diners can have options to choose from.


How is your pho different?
Probably the one with clams is what’s the most different. I just one day thought that clam broth would work well with meat broth, so I just tried. Clam broth helps the soup become not too heavy and refreshing. The biggest lesson I learned while doing multiple pop-ups is that it is just as important how you cool down the soup as much as you boil it, unless you are to use the entire broth at once. I had to throw an entire bucket of broth away before because I cooled it incorrectly.


Tell us more about the charcoal-grilled meat plates for dinner.
It is something special we are doing so that alcoholic beverage drinkers have something more hearty to eat. When you boil soup, you put lots of different types of meat in it. I started to think that just like a Korean beef soup, or naengmyeon, (noodles in cold meat broth) places that serve the meat that was used to make the broth — why not do the same when it comes to pho? We use quality meat to make the broth, so we wanted to serve that meat as well. That will help us to make the broth thicker and deeper. We tried to grill it on charcoal and it was so good. You can have all kinds of beef parts grilled on charcoal such as cartilage, ribs and even beef tongue. I think diners also find it interesting to see different parts available on the menu.


What about the onion and radish that are placed on every table?
At first I thought about just using ggakdugi (radish kimchi) as I did during a pop-up. But, I began to think that I need something more refreshing to cleanse diners’ mouths. When I was stuck at home for six months, I bought different kinds of fish sauce to work on the side dish to present. I wanted something different than pickled onions that many Vietnamese restaurants in Korea serve. I mixed radish, garlic and peppers together with fish sauce. I bet you will find the sauce I made here in Vietnam after maybe five years, and even the charcoal-grilled meat at pho places [laughs]. Vietnam is also going through many cultural exchanges with other countries and who knows, maybe what’s being done in Korea can inspire some restaurants and chefs in Vietnam to create something similar there too.


How do you come up with new ideas?
I’m not creating something that didn’t exist before. I’m just checking what’s available in different dining scenes and making a different version to fit. The radish and fish sauce thing is something I got from the Korean-style gomtang place. Getting the meat at a beef soup restaurant is something so common at Korean restaurants but not so common at spots from different cultures. You just need to have an idea to mix and match things from different cultures and backgrounds. 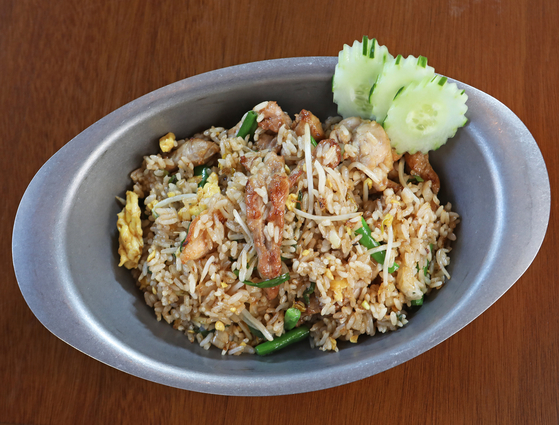 Why did you decide to move beyond running fine dining and focus more on casual food?
I like making soup so I wanted to start doing that. Another dish I have the greatest passion for is fried rice. Following soup, fried rice is something I really enjoy to make and eat. Whenever there’s a chance for me to make a meal for staff, I have done fried rice so many times. I have accumulated my own know how and I wanted to check if it works. Soup and fried rice are two things I’m so confident in making. These are something anyone can eat almost every day and that’s the kind of food I want to do now. Doing something casual but with premium ingredients and cooking skills is what I’m going after. I want people to be able to feel a difference from what’s made under my restaurants, than from similar food from somewhere else.


Why the name I Pho U?
Seoul has taken I Seoul You as its slogan. I thought it was so ridiculous, so I wanted to parody the phrase to name my pop-up. It sounded weird at first, but as I have used it for years, it has become a brand in itself. Some may think this isn’t so trendy, but that’s something we have made over the years and it carries some meaning. So I decided to use that name for the cafe as well. And when the restaurant itself is awesome, people will take the name as something awesome.


What about Pyunghwaok, the first casual spot you tried last year?
It has almost gone out of business. We have been preparing to open one in New York with the name Pyunghwa, but the pandemic has put a stop on it.


How are things with Jungsik New York?
At the moment we are only doing delivery and serving guests outdoors. No one is sure how to prepare for the future. We are just waiting to see what happens.


Any other plans for the near future?
I’m planning to open a Korean-style seafood restaurant that serves hoe, sliced raw fish in Cheongdam-dong. People have picked up a certain image when they hear the concept of Japanese izakaya, but Korean hoe places don’t really have that. I want foreigners to have a certain image of a Korean seafood restaurant. I picture there will be lots of differently sized tanks with live seafood swimming around. I want people to be able to see all the amazing colors each fish has through the clear tanks. It will be something artistic. There will be seafood prepared in different ways; raw, grilled, boiled or in cold soup. You can choose to have a small plate or some large fish to make your own assorted plate. Since I’m only in the beginning stages of planning, details may change in the future.


As someone who’s been a chef and restaurateur for 11 years, how do you see the future of the food and beverage industry in Korea?
I don’t know too much about the trends or how the economic situation is changing, but one thing I’m going to focus on is going premium. The pho at I Pho U isn’t cheap. But I want to use better ingredients even in a bowl of more everyday food as I think what diners want is a different experience from something they feel comfortable with. I even thought about having this pho delivered to homes with broth served separately, so the delivery person would pour the broth on the noodles. I’m looking for ideas from anywhere and everywhere.