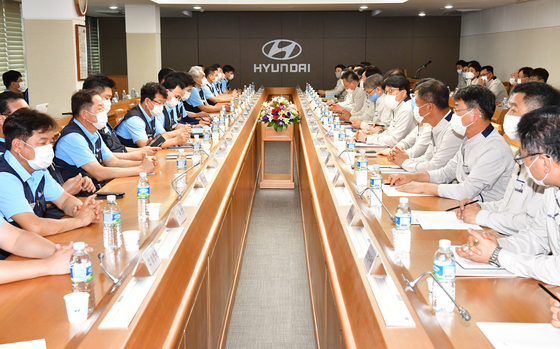 Hyundai Motor and its labor union came to a tentative agreement on Monday to freeze wages. [YONHAP]

Hyundai Motor and its union came to a tentative agreement Monday evening to freeze wages, with both sides agreeing on the need for cooperation to survive the coronavirus pandemic.

It is the first time in 11 years that the union agreed to freeze wages, and the third time ever.

The first time was in 1998 during the Asian financial crisis. The second was in 2009 after the global financial meltdown.

Hyundai Motor’s labor union, known for hardline strikes, agreed on a wage freeze for 2020, a regular bonus worth 150 percent of their monthly salary, and another bonus of 1.2 million won ($1,000) as an encouragement to overcome Covid-19 difficulties.

The union will vote on the agreement on Sept. 25.

“The union and management agreed that the economic and social situation in Korea has been difficult due to Covid-19,” the company said in a release.

“We agreed that we need to work together in order to overcome the crisis in the auto industry amid a global economic recession.”

It took 40 days to come to the agreement, and there were no walkouts during the negotiations.

It was the second straight year that the union and management were able to come to a temporary agreement without walkouts.

The two sides pledged to cooperate to enhance the quality of the cars produced, which would eventually lead to stable employment. They agreed to strengthen a quality control team at each manufacturing plant and a feedback system from customers.

Hyundai Motor’s union is infamous for militant actions. Since its foundation in 1987, the union staged either partial or full walkouts every year to demand higher wages, except for in 2007 and 2009-2011.

In 2016, when the union staged its first full strike in 12 years, it lead to disruption of at least 3 trillion won worth of production.

Last year, when the union and management came to a deal without a walkout, Hyundai Motor posted a 52 percent year-on-year jump in its operating profit.

Other carmakers in Korea are still negotiating with their unions.