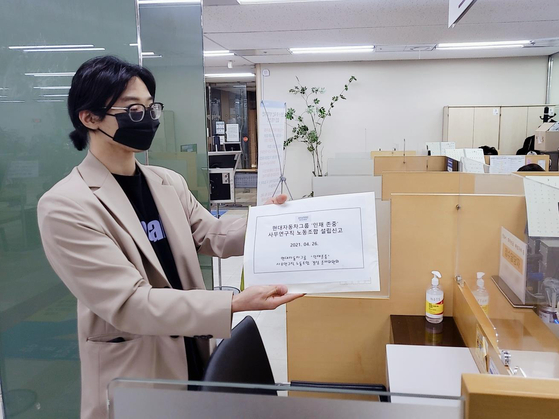 The group consists of office workers and researchers inside the conglomerate, mainly in their 20s and 30s with less than eight years of work experience. Its members submitted registration documents to the Ministry of Employment and Labor on Monday morning. Approval is expected to be granted by Wednesday.

At the head of this young union is 27-year-old Lee Keon-woo. Lee joined the carmaking conglomerate last year as a research engineer at Hyundai Kefico, which develops electronic control units.

Hyundai Motor Group already has a labor union famous for its history of hardline strikes. Affiliated with the umbrella Korea Metal Workers' Union, it is considered one of the most vocal organizations and the largest of its kind in Korea, with more than 50,000 members.

Lee, however, told local reporters that the existing labor union did not fully represent the opinion of white-collar employees, given the fact that it has traditionally been oriented to blue-collar factory workers.

"The old labor union prioritizes the benefits of production site workers and does not transparently disclose information [in the decision making process]," he said.

"The point that differentiates us the most is that our decision making will be based on statistics and data, fulfilling values like transparency and fairness."

Around 500 employees inside the group have already expressed their intention to join the labor union. The plan is to accept all kinds of employees, not only those in permanent positions, but contract and temporary workers as well.

"No Pay No Work" is the slogan for the new labor union. In other words, members will require pay and incentives according to the amount of work done, rather than accepting a system where older employees receive more money based solely on their years of service, which in Korea is still often the practice, especially at older companies like Hyundai Motor.

This is also a different direction from the other Hyundai labor union, which in recent years has put forward job stability and extending the retirement age as a priority.

In its wage negotiations last year, the labor union pushed for the retirement age be extended to 65 years. Younger employees, on the other hand, had asked for a fair compensation system based on performance.

Despite the intention, it's unlikely that the new organization will be able to immediately exercise power over wage negotiations, as the matter is typically decided between the dominant union and top management.