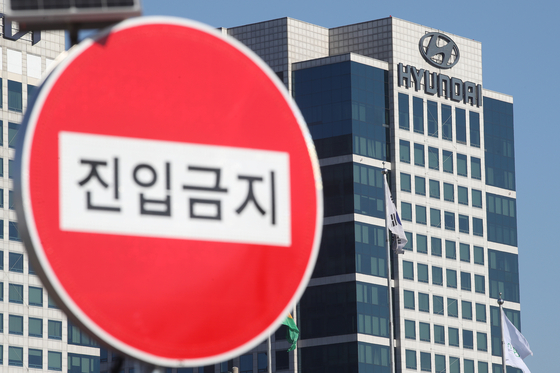 Hyundai Motor, one of the most coveted workplaces in Korea, is experiencing a brain drain of young employees.

A group of employees that worked fewer than three years at Hyundai Motor, Hyundai Mobis and Hyundai AutoEver were found to have recently quit their jobs and moved to IT companies, including Samsung Electronics.

“I got a job at Samsung Electronics’ foundry facilities development team,” a former Hyundai Motor employee posted on Blind, a mobile app where workers can grouse and trade gossip.

“I applied there because the working conditions seemed to be 200 times better than Hyundai Motor’s Namyang R&D center.”

Another rookie employee at Hyundai Mobis who just finished training didn't bother showing up for his first official day on the job. He found work at another company.

Hyundai Motor is one of the most desired workplaces among college graduates due to its generous compensation.

At its peak in 2012, the company paid 500 percent of employees' monthly base pay in incentives and also paid a one-off bonus of 9.5 million won.

Since then, the amounts have declined. 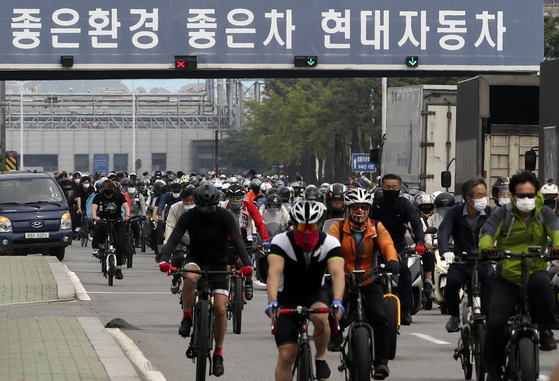 Workers at Hyundai Motor's Ulsan factory get off from work. [YONHAP]

One of the biggest complaints by younger employees at Hyundai Motor is that the company’s labor union is controlled by blue-collar workers in their 50s. The union, affiliated with the Korea Metal Workers' Union, is one of the strongest unions in Korea with more than 50,000 members, but one major emphasis is how long workers can stay at the company, not salary and incentive hikes.

In last year’s wage negotiations, the company accepted the union’s request to allow those who retire at 60 to work one more year as contract workers. Workers' base wages, however, were frozen for the first time in 11 years.

That is why a new union comprised of young white-collar workers at Hyundai Motor Group was established earlier this year. The union, however, hasn’t been effective so far.

“The old union only asks for retirement age extension instead of increases in incentives,” said one white-collar employee at Hyundai Motor. “If we don’t like the company, we have no choice but to leave."

R&D team employees are attracted to IT companies, many of which pay well.

Workers specializing in auto design, performance and structure at Hyundai Motor's Namyang R&D Center, don't have the same kind of opportunities outside the company because Hyundai Motor is the No.1 player in Korea's auto industry.

"That is why the company is so lackadaisical about improving working conditions for young workers at the Namyang R&D Center," said one employee from Hyundai's Namyang R&D Center.  "It knows that auto-specialist research employees don't have other options."

An exodus could ultimately lead to a decline in the company's competitiveness.

“Industries like autos, which are experiencing a paradigm shift, have to change their existing systems to survive,” said Kwon Soon-won, a business administration professor at Sookmyung Women’s University.

“A concept like ‘lifetime jobs’ resonates only with the older generation and renewal is needed in working and welfare conditions to make the younger generation stay.”