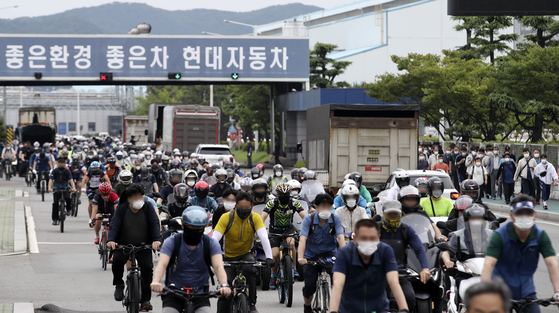 Unionized workers at Hyundai Motor get off from work on Thursday at the carmaker's Ulsan plant. [NEWS1]

Unionized workers at Hyundai Motor are likely to stage a walkout for the first time in three years due to failed negotiations over pay and the retirement age.

Of the 48,599 unionized workers at the Korean automaker, 73.8 percent agreed to a walkout, according to the union Thursday.

With an approval rate of over 50 percent, the union can apply to the National Labor Relations Commission for permission to walk out. Once the commission grants approval, the union can legally stage a walkout.

The union said Thursday that it is still open to talks with management and finishing the wage negotiations before August if management make a reasonable offer on wages.

Hyundai Motor’s labor union and the management initiated talks in May and held 13 rounds of negotiations through early this month but failed to come to an agreement.

The union requested a base monthly pay raise of 99,000 won and 30 percent of last year’s operating profit as incentives.

It also requested an extension of the retirement age from 60 to 64.

The management refused to extend the retirement age.

If the union stages a walkout this year, it would be the first time since 2018.

The union did not stage a walkout in 2019 as a trade dispute with Japan was hampering the carmaker’s sales. It was the first time for the union, with a history of militancy, to agree on a wage deal without a walkout in eight years.

This year, the management said the company is not in a good business environment due to global semiconductor shortages, which led to shutdowns of its production facilities around the world.

Ha Eon-tae, CEO of Hyundai Motor, said last week that the chip shortage disrupted the making of 70,000 cars in the first half. Operating profit last year dropped by 33.6 percent year on year.

Other carmakers in Korea are also at odds with the unions on wages.

After 10 session of wage negotiations with management, GM Korea’s union voted in favor of staging a walkout recently. Renault Samsung Motors has yet to complete last year’s negotiations. Management suggested a wage freeze for two consecutive years, a proposal roundly rejected by the union. In May, the union staged a full-fledged walkout. The management locked out striking workers from the facilities as a result.