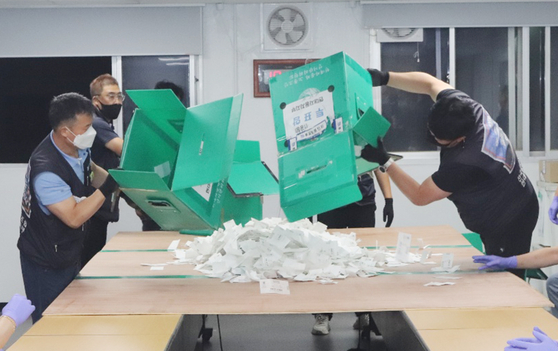 Unionized workers at Hyundai Motor count ballots at the office of Ulsan factory on July 28. [YONHAP]

Hyundai Motor's unionized workers voted in favor of a tentative wage package, according to the automaker on Thursday.

Of the 42,745 union members who participated in the vote, 56.36 percent voted in favor of the wage deal.

There were concerns earlier that the tentative deal could be voted down as younger workers wanted more incentives and a bigger pay raise, while the older workers were pushing for an extension of the retirement age.

"The union's culture, which has been hardline, is changing," Kim Jin-woo, auto analyst at Korea Investment & Securities, wrote in a report, explaining it is in part due to the retirement of the older people.

"Also, with the paradigm shift towards future mobility, it would be hard for the company to survive without cooperation between union and management."

This is the third consecutive year in which an agreement has been achieved without a strike. It is only the second time for the company to go three years without a walkout.

It failed to come to an agreement at its eighth negotiation session on July 20, and the union requested the National Labor Relations Commission to approve a walkout.