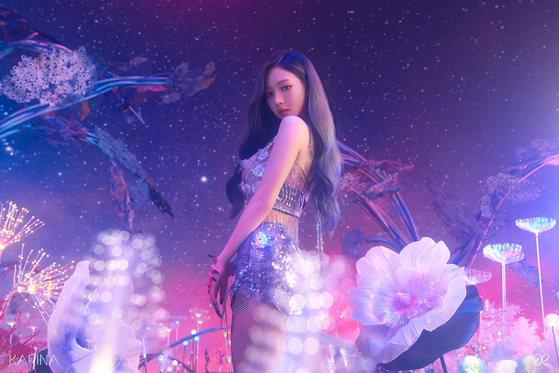 Her name is Karina. She is 20 years old and she is Korean.

According to the agency, Karina can "sing as a main vocal, as well as rap and dance," adding that she is an artist "of extraordinary versatility."

SM Entertainment began promoting the group on Oct. 26, revealing its logo image then introducing the first member, Winter, the following day. The agency did not reveal how many girls will be in the new group.

Unlike Winter, who has a blonde and blue dip-dyed hairstyle in the teaser image, Karina projects more of a female warrior vibe, with dark black hair.

Fans anticipating the debut of the new SM group have been digging up information about Karina. They say her real name is Yoo Ji-min, and that she has been a trainee at SM for four years.

Those familiar with SM artists may recognize her, as she has performed in SHINee member Taemin's "Want" music video and during a stage performance in 2018.

The agency said it will continue to provide a drip feed of information about the group before its debut next month. A precise date has not yet been announced.

Aespa will be the first new group from SM in four years. It debuted boy band NCT in 2016.