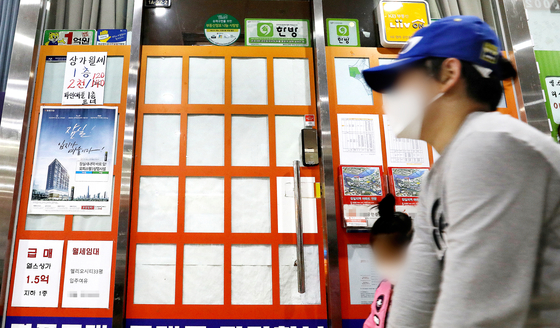 The window display of a real estate agency in downtown Seoul in October. Apartment prices have been rising rapidly since the tenant protection laws went into effect in July 2020, and even younger people are scrambling to buy property. [NEWS 1]


The fear-of-missing-out epidemic has crossed the Han River, as buyers in their 20s and 30s push up the price of properties north of the river.

They are scraping together whatever money they can find and borrowing to the hilt, driven by anxiety that they will all of a sudden lose their status if they sit still.

Data from Seoul National University’s Shared City Lab showed that the growth rate in apartment prices was higher for areas where a lot of the buyers were in their 20s and 30s.

For Gangbuk District, where the influx of young people in their 20s and 30s was heavy last year, apartment prices rose by 34.1 percent, the highest rate in Seoul’s 25 districts. Apartment prices in Dobong District in northern Seoul rose by 31.6 percent in 2020, and the growth rates for apartment prices in Jungrang and Guro districts were also relatively high.

“Since the second half of 2020, many of the young customers like married couples in their 20s and 30s have been looking for apartments priced lower than 600 million won [$543,000],” said a real estate agent in Chang-dong of Dobong District. “Many people are trying to buy houses, but since there are not enough in the market, the prices are often determined by the sellers.”

Apartment purchases in Gyeonggi’s Gimpo and Paju by those in their 20s and 30s rose more than three-fold compared to 2019. The number of purchases in Gimpo rose by 222 percent, and Paju by 210 percent. Young people also bought more apartments in Pyeongtaek, Goyang and Gunpo than in 2019.

“Since the second half of last year, as the quantity of jeonse apartments became scarce, property buying of those in their 20s and 30s started to be concentrated in regions like Gimpo and Paju,” said Lim Byung-chul, a chief researcher at Real Estate 114, a local real estate information provider and a subsidiary of Hyundai Development Company (HDC).

The property buying trend led by younger people is not slowing down in the new year. Even after the government’s announcement that it would introduce property measures before the Lunar New Year that will “rise above the market predictions,” the demand for apartments in the metropolitan region continues to rise.

According to the Korea Real Estate Board, the index measuring the supply and demand for property in the metropolitan region was 117.2 on Jan. 18, recording the highest figure since July 2012 after rising 1.9 points on week. When the index is higher than 100, it signals that there are more buyers than sellers, and vice versa for values below 100.

The higher demand compared to supply has resulted in the surge of apartment prices. The Korea Real Estate Board’s weekly data for the change in apartment prices in the metropolitan region showed that the average rate of change was 0.31 percent on Jan. 18, the highest value in eight years and eight months.

The buying trend is happening outside of Seoul as well. Prices of apartments in Dukyang District in Goyang and Yangju, which are near the Great Train Express (GTX) that offers express trains to Seoul, have been rising rapidly, jumping over 1 percent within a week. In December, 1,492 outside residents bought property in Goyang, taking up the highest proportion of property buyers in 11 years.

“People in their 20s and 30s are in a tough position where it is difficult for them to buy property or shy away from doing so,” said Doo Sung-kyu, a senior research fellow at the Construction & Economy Research Institute of Korea (Cerik). “As jeonse prices skyrocketed due to the tenant protection laws, they are trying to buy homes after taking out loans and getting support from their parents.”

“The government said it would increase supply by pushing forward apartment pre-applications at the third-generation new towns and developing regions near transportation hubs,” Doo said. “But since the results will be seen during the next administration, they are empty words for the young people.”

The Ministry of Land, Infrastructure and Transport announced on Jan. 1 that it would begin taking pre-applications for the third generation of new towns in Goyang, Incheon, Hanam, Namyangju and Bucheon.

“It is virtually impossible for people in their 20s and 30s to win the lottery for the pre-applications, so they are searching for homes in the market,” said Lim. “The buying trend for the group will continue throughout the year.”