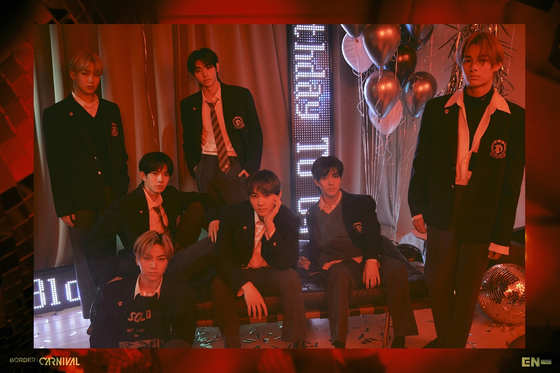 
Boy band Enhypen will drop its second EP "Border: Carnival" on April 26, the first new music from the band in five months since its debut release "Border: Day One" last year.

The band's agency Belift Lab announced Friday that over 300,000 copies have been preordered within five days since April 9.

"Seeing how it took 20 days for the band's first EP to surpass 300,000 preorders, this is evident of the band's rapid growth," the agency said.

The EP will be a six-track compilation of songs that express "the chaotic emotions that Enhypen felt after debuting and facing the new and unfamiliar world."

The lead track "Drunk-Dazed" was composed by producer Wonder Kid and HYBE's head and CEO Bang Si-hyuk to describe young men getting drunk and dazed at a carnival.