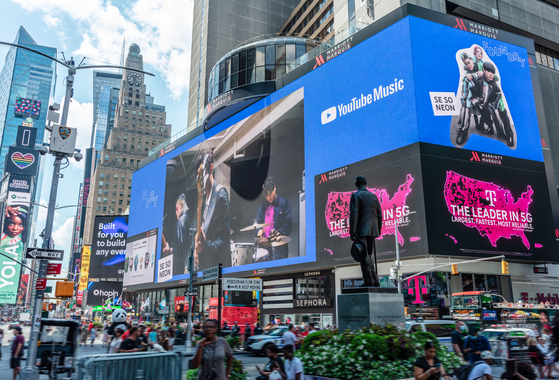 Indie band Se So Neon appears on a billboard in New York City as part of its participation in YouTube Music's Foundry program. [MAGIC STRAWBERRY SOUND]


Indie band Se So Neon appeared on billboards in New York City, Los Angeles and London as part of its participation in YouTube Music's Foundry program, according to its agency Magic Strawberry Sound on Tuesday.

YouTube Music's Foundry is a workshop program designed to discover and promote artists from all around the world. Approximately 150 up-and-coming artists have participated in the program since it launched in 2016.

Se So Neon was selected to represent Korea as the Foundry Class of 2021 last month.

YouTube supports the selected artists and promotes them to audiences around the globe on its platform. Se So Neon’s appearance on the billboards was part of YouTube’s promotion.

“We are glad to participate in Foundry,” said the band. “We will repay with good music.”

Se So Neon debuted in 2016 and is best known for its song “Jayu” released in February.