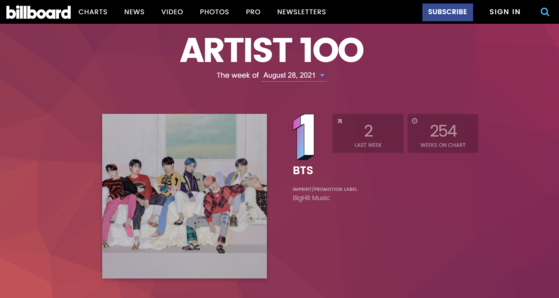 
BTS’s domination of the music industry continues as the boy band achieved its 20th No. 1 on Billboard’s Artist 100 chart this week.

Billboard announced Thursday that BTS returned to the top spot after spending last week at No. 2.

The weekly chart was established in 2014 and combines an artist’s overall performances such as song and album sales, radio play and social media activities.

Billboard has attributed the band’s return to No. 1 to recent Billboard-topping singles “Butter” and “Permission to Dance,” both released this year.

Only three artists, Taylor Swift (48 weeks), Drake (32 weeks) and The Weeknd (22 weeks), have spent more weeks atop the chart. However, BTS has the most No. 1s for a group.

Meanwhile, BTS topped the Oricon DVD chart with “BTS Memories of 2020,” a compilation of BTS’s activities and performances from last year. BTS became the first overseas artist to achieve the milestone on this chart for two weeks straight.