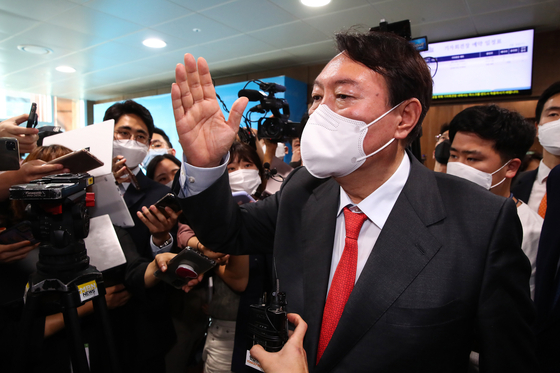 Presidential contender Yoon Seok-youl speaks to reporters Wednesday after holding a last-minute press conference at the National Assembly in western Seoul Wednesday to address allegations that he had been involved in a prosecutor conveying to the opposition party criminal complaints against pro-government figures ahead of last year’s general elections. [NEWS1]


Presidential candidate Yoon Seok-youl fiercely rebutted Wednesday allegations of abetting a prosecutor to get the opposition party to file criminal complaints against pro-government figures ahead of last year’s general elections.

Newsverse, an online news outlet, reported on Sept. 2 that Son Jun-sung, then chief of investigative information policy at the Supreme Prosecutors’ Office, provided two criminal complaints directed at journalists and political figures affiliated with the ruling Democratic Party (DP) to Kim Woong, now a first-term lawmaker of the PPP, ahead of the general elections on April 15, 2020.

Son, now working for the Daegu High Prosecutors' Office, is a close aide of Yoon, who was prosecutor general at the time, leading to speculation whether the presidential hopeful had any involvement in the complaints.

Kim, a former prosecutor who at the time had been running for a seat in the National Assembly for the United Future Party (UFP), the precursor of the PPP, allegedly conveyed the documents to his party, though he claims he doesn’t remember if he did.

“Whether it is a paper document or a digital document, only when the source and author are confirmed can suspicions and issues be raised on credible grounds,” Yoon said Thursday, rejecting the allegations. “Call me to the National Assembly, and I will confidently speak on my position.”

He likewise addressed the initial whistle-blower and said, “Don't throw a bomb like that and then hide," calling the accusations as "political maneuver" ahead of next year's presidential election.

The reported criminal complaints were against around a dozen journalists and political figures affiliated with the ruling DP, accusing them of violating the public office election law and the act on promotion of information and communications network. These individuals included reporters and staff at broadcaster MBC and online media outlet Newstapa; Rhyu Si-min, chairman of the Roh Moo-hyun Foundation; Choe Kang-wook, a proportional representative and head of the liberal Open Democratic Party (ODP); and Hwang Hui-seok, also a member of the ODP.

The complaints reportedly accused the individuals of spreading false information in an alleged attempt to influence the April 2020 elections. These media outlets had reported on alleged stock manipulation by Kim Keon-hee, Yoon’s wife, and a collusion scandal involving a senior prosecutor, Han Dong-hoon, a close ally to Yoon, and a Channel A reporter.

Newsverse revealed a series of screen captures of Rep. Kim’s messages over Telegram, an encrypted messaging app, from April 3 and 8 last year which included excerpts of the complaints. The screen captures showed the name Son Jun-sung as the sender of the message. It was unclear if the sender's name alone could prove Prosecutor Son's involvement.

Yoon and Son immediately denied the allegations in the report.

PPP Rep. Kim Woong, embroiled in allegations that he received criminal complaints from Son, held a press conference Wednesday morning at the National Assembly in an attempt to clarify his position, but only caused more confusion.

Kim stuck by his position that he doesn’t remember if he received the documents while leaving open the possibility that he did pass them along to his party.

“I do not remember whether or not I received the complaint, and there is no way to confirm it,” Kim said through his long-winded press conference that revealed little.

“Under the given circumstances, I may have received the documents from Son and passed it on to the party,” said Kim. “However, there are also claims that [the evidence] may have been manipulated and his name borrowed."

He also said that the complaint against Rep. Choe Kang-wook was not written by him.

Likewise, he claimed that he had been too busy ahead of the general elections to properly review all the documents that came his way during that period.

Since the report first broke, Kim initially claimed that he wrote one of the complaints, then backtracked, saying he doesn’t remember, clouding his credibility with his shifting remarks.

“Currently, there are no records left for me, so I would like authorities to thoroughly investigate the facts based on the informant's cell phone and Prosecutor Son’s computer and reveal it as soon as possible,” Kim told reporters Wednesday.

He said that the whistle-blower has become a “public interest informant,” hence he could not speak on his identity.

Kim however said that he would step down as spokesman for PPP presidential candidate Yoo Seong-min to take responsibility for the current controversy.

Prosecutor General Kim Oh-soo ordered the Supreme Prosecutor's Office to conduct an internal probe into the allegations which immediately kicked off Friday.

Yun Ho-jung, floor leader of the DP, on Wednesday called on Yoon to apologize to the public and comply with investigations. He said Tuesday that the prosecution probe is insufficient and called on the Corruption Investigation Office for High-ranking Officials (CIO) to start a speedy investigation to reveal the truth.

The whistle blower reportedly turned in his mobile phone and other evidence to prosecution Wednesday.