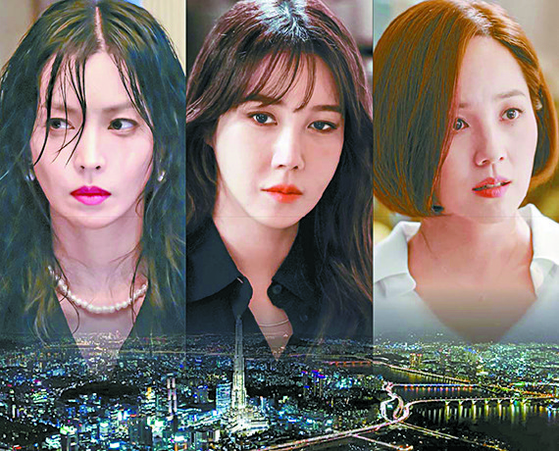 SBS's ″Penthouse″ follows elite families that fiercely compete over real estate and education, with a provocative and speedy plot and remarkable acting from the cast. [JOONGANG ILBO]


Fans of SBS’s smash hit television series “Penthouse” were thrilled to hear the news that the drama had been renewed for not only one, but two more seasons. However, the finale of season 3 failed to live up to fans’ expectations.

“Penthouse” dropped its final curtain after about a year of airing with a viewership rating of 19.1 percent as of the last episode on Sept. 10. The drama follows elite families that fiercely compete over real estate and education, with a provocative and fast-moving plot and remarkable acting from the cast. During the first season, the viewership rating reached 28.8 percent at its peak and jumped to 29.2 percent in the second season, but the final season dipped to below 20 percent.

The entire series was written by screenwriter Kim Soon-ok, who made her breakthrough with SBS’s “Temptation of a Wife” (2008-09) and opened the era of makjang dramas, a genre with storylines so insanely suspenseful and immoral that they are considered ridiculous by viewers. In “Temptation of a Wife,” the highest viewership rating peaked at 37.5 percent. “Penthouse” is Kim’s first attempt at a seasonal drama. 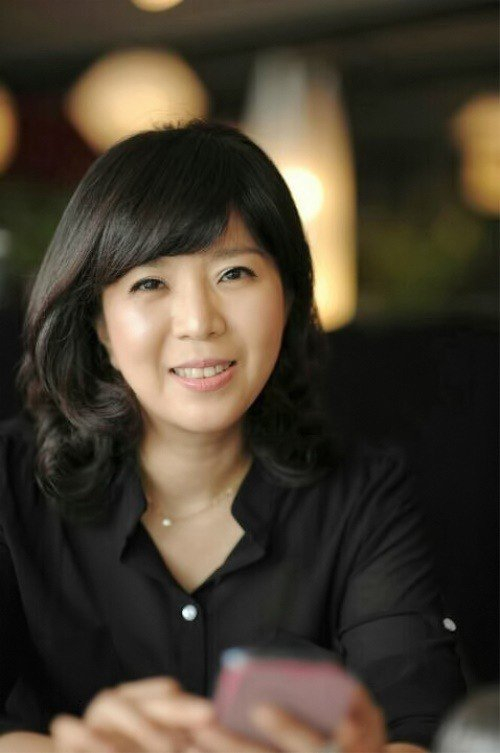 Screenwriter Kim Soon-ok opened the era of makjang dramas, a genre with storylines so insanely suspenseful and immoral that they are considered ridiculous by viewers. [SBS]


“Penthouse” was a show that basically revolved around viewership ratings, as it is unusual for a terrestrial television series, excluding the weekend soap operas on KBS, to reach 30 percent.

“By casting actors who are in their late 30s to mid-40s, the series gained immense popularity and attracted many fortyish fans into the world of makjang, since such fans are particularly interested in romantic relationships and marriage," said culture critic Kim Heon-sik. "This generation is already familiar with how games work, so the over-the-top setting of ‘Penthouse’ was actually perceived like a separate universe in a game."

In the finale, three of the main characters were killed off, meaning all six main characters of the story had died — although some characters returned as ghosts or faked their deaths. In an earlier season, actors Park Eun-seok and Lee Ji-ah shocked fans by each playing three and two different roles, respectively. The story was filled with such absurd details that viewers weren’t surprised by the show’s doomed ending but that didn't stop fans who had been immersed in all three seasons from feeling let down.

“The series was devoid of plausibility from the beginning, and instead focused on establishing a new fantasy-like world, but it was unable to wrap it all up in the end,” said pop culture critic Jeong Deok-hyun. He expressed his concern that television shows in the future may sway heavily based on only viewership ratings. Even though season one’s high ratings paved the path for seasons two and three, in the end, the series collapsed altogether.

“There wasn’t anything new to bring to the table anymore, so [the writers] just mustered up chaos and focused on the violence,” Kim said. “This made viewers sick and tired [of the show].” 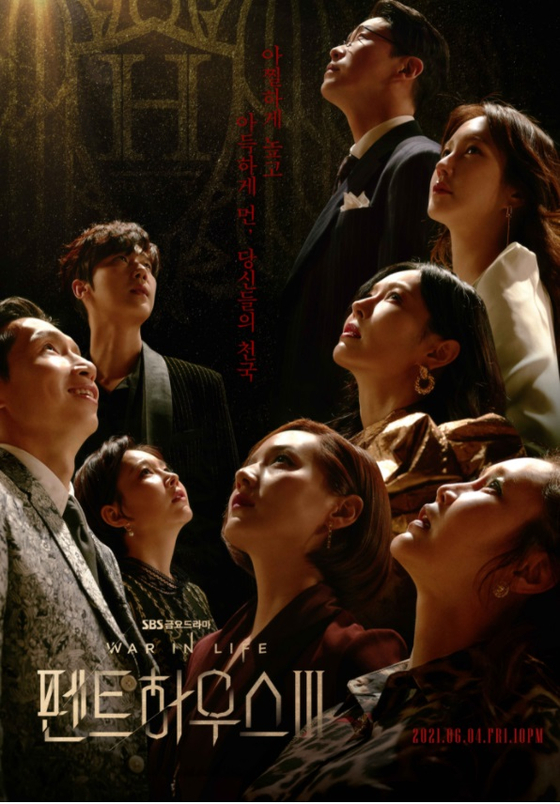 The poster for the third season of ″Penthouse″ [SBS]


Critics worry about how the television industry will change “post-Penthouse.”

“What if this equation forms, where production crews believe that triggering plotlines are the only way to get higher ratings?” said Jeong. “It shouldn’t be tolerated.”

Another pop culture critic Ha Jae-keun said that though terrestrial broadcasting companies aren’t in the position to be picky about how to make more money, if shows continue down this road, content will lose dignity and credibility.

“A vicious cycle could be initiated — one starting from the younger generation where people no longer watch shows on television anymore,” Ha added.

The show was also severely criticized for overstepping the line in season three. In episode 13, aired on Sept. 3, Joo Dan-tae, played by actor Um Ki-joon, bombed his high-rise luxurious apartment home, the Hera Palace. Real news footage from a deadly collapse of a five-story building in Gwangju that killed nine people and injured eight back in June was used in the scene. The production crew eventually apologized on the final episode for inappropriately using a tragic incident for the show, and stated that the scene has been deleted from all re-runs and video on demand.

“Even if the show is entirely fictional, to misuse an unfortunate disaster as a dramatic device for the show just proves how insensitive the screenwriters were,” said Jeong. 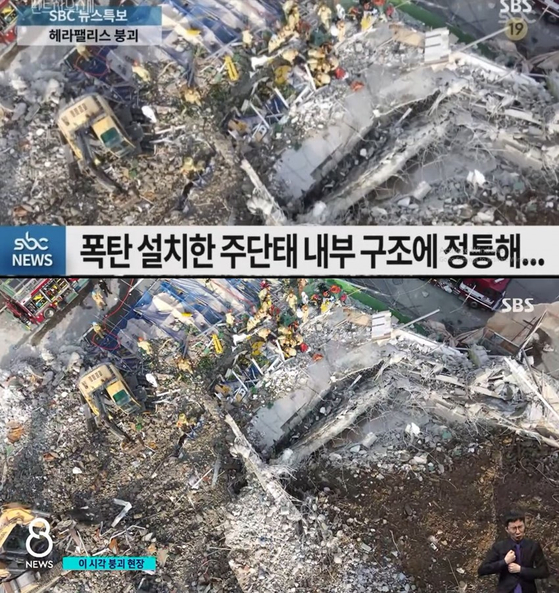 Real news footage of the deadly collapse of a five-story building in Gwangju that killed nine people and injured eight back in June was used in the show. Top shows the ″Penthouse″ scene and below is the actual news footage. [JOONGANG ILBO]


Viewers also expressed their discomfort due to other reasons. According to the Korea Communications Standards Commission (KCSC), a total of 831 complaints were submitted as of Sept. 10. Twenty-five of them were about season three, most of which were about the Hera Palace collapse scene. However, dealing with the complaints is taking longer than usual as the KCSC’s fourth commission ended its term in January and the fifth commission was formed six months later in August.

So when episode two of season one was criticized for being too violent, the show received only a “warning” at the time and so far the fifth commission has only submitted a statement of opinion on season two. To put it simply, the drama has already finished airing all its excessively violent, provocative scenes yet the KCSC is now only starting the evaluation.

“If the KCSC were prompt in the evaluations then the production crew would have probably walked on eggshells [about airing violent scenes],” Kim noted. “Instead they were free to go on a rampage of inserting stronger stimuli into the show.”

Actors like Kim So-yeon, Eugene and Lee who played the main characters have definitely made strong impressions thanks to “Penthouse.” Kim debuted as a child actor and starred in television shows like MBC’s “All About Eve” (2000) and SBS’s “Prosecutor Princess” (2010), whereas Eugene is a former member of the girl group S.E.S. Lee debuted in 2007 in the MBC historical fantasy drama “The Legend.” “Penthouse” each gave them memorable characters in their respective acting careers. Kim, in particular, won the best actress prize at the 57th Baeksang Arts Awards for her performance in “Penthouse” in May.

Um, who is famous as a theatrical actor, and Park have also gained popularity through their roles in the series. Although Ha agrees that the show has highly benefitted their reputation as actors, Jeong thinks otherwise.

“The production crew and SBS may have seen commercial success with high viewership ratings, but I’m skeptical if it will actually be an advantage to the actors’ careers,” Jeong said.