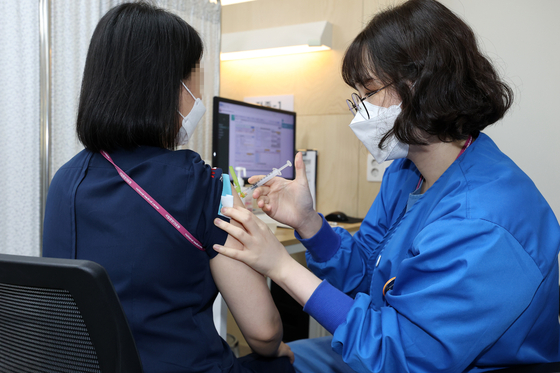 A medical staffer receives a Covid-19 booster shot on Tuesday at the National Medical Center in central Seoul. [YONHAP]


Korea donated AstraZeneca Covid-19 vaccines to Vietnam and Thailand, as 60 percent of its population has completed their shots.

“As a responsible member of the international community, the Korean government will roll out donations to countries that have difficulty procuring vaccines, in efforts to cooperate with the global pandemic response,” the Ministry of Foreign Affairs and the Korea Disease Control and Prevention Agency (KDCA) said in a press release on Tuesday.

“Firstly, we have decided to donate 1.1 million doses and 470,000 doses of the AstraZeneca vaccine to Vietnam and Thailand, respectively, which are suffering from the spread of pandemic,” they said. “The shipments will depart on Tuesday and will arrive in each country on Wednesday.”

It is the first direct provision of vaccines from Korea to a foreign nation. Korea has given financial support to the COVAX Facility, the World Health Organization (WHO)'s vaccine-sharing mechanism, to which it has pledged $200 million to supply vaccines to lower-income countries.

The authorities explained that the decision was made after considering the country’s high vaccination rate and current stockpiles.

As of 1 p.m. Tuesday, Korea’s full vaccination rate hit 60 percent, or 70 percent of the adult population.

“Vietnam is a key partner in the New Southern Policy, with around 156,000 Korean nationals residing and some 9,000 Korean companies operating there,” the government said. “At the Korea-Vietnam summit on the sidelines of the U.N. General Assembly session in September, Korea promised to provide more than 1 million vaccine doses to Vietnam, which has a relatively low vaccination rate.

“Thailand is a key partner in the New Southern Policy, with more than 18,000 Koreans residing and some 400 Korean companies operating, and the two countries decided to seek vaccine development, production cooperation and related measures when Korea’s foreign minister made an official visit to the Prime Minister of Thailand in August,” it said.

The government said it has been closely discussing with the Vietnamese and Thai governments ways to safely provide vaccines and to promptly inoculate people in the countries, including Korean residents.

It added, "We expect this donation to contribute to the early return of citizens of both countries to their daily lives, and we will review additional support for other countries in need of vaccines while taking consideration of Korea’s vaccine supply and vaccination rate.”

The inoculation plan for booster shots, or an extra dose of a vaccine after the initial series of injections, was newly announced as the more contagious Delta variant predominates in Korea and cases of breakthrough infections continue to be reported.

Those eligible for boosters include some 45,000 medical staff in around 160 Covid-19 medical facilities nationwide who are working with coronavirus patients. They received Pfizer vaccines in February or March.

Pfizer shots will be available, which they can get at the medical facility they work for. Inoculations will take place until Oct. 30.

Next up for booster shots will be people over the age of 74 and patients and employees in old age homes, who got their first shots on or after April 1. The country has been accepting reservations from Oct. 5 and around 40,000 people have booked appointments. Booster shots will be given from Oct. 25 at medical institutions nationwide with an mRNA-based vaccine — Pfizer or Moderna.

Next up will be people with weakened immune systems who will receive the shots from Nov. 1; followed by patients and employees at nursing homes from Nov. 10; and hospital workers from Nov. 15. The general public aged between 60 to 74, who completed their vaccination with the AstraZeneca vaccine, are scheduled to receive boosters next February.

The government has said at least 70 percent of the general public, or 80 percent of adults and 90 percent of the elderly, must be fully vaccinated before shifting to a new set of "With Corona" policies, or recovering peoples' normal way of life, similar to the "living with Covid-19" strategy being discussed in other countries around the world.

The government plans to announce the country’s new social distancing adjustments this upcoming Friday, which will be the last before Korea adopts the new "With Corona" strategies by Nov. 9.

Eleven virus deaths were added, with the death toll coming to 2,594.