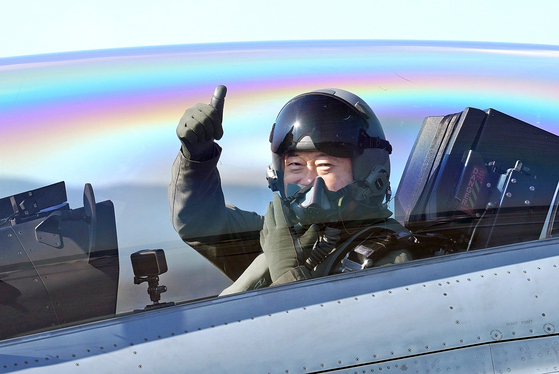 President Moon Jae-in gives a thumbs up from inside a FA-50 light fighter aircraft as he flies on Wednesday to Seoul Air Base in Seongnam, Gyeonggi, to deliver his congratulatory remarks to defense industry officials at the 2021 Seoul International Aerospace and Defense Exhibition. [JOINT PRESS CORPS]


Korea kicked off the largest defense and aerospace exhibition in Northeast Asia, the Seoul International Aerospace & Defense Exhibition (ADEX) 2021, on Tuesday at Seoul Air Base in Seongnam, Gyeonggi, where a vast array of cutting-edge weaponry and military equipment, including the country's latest satellites, large hydrogen-fuel drones, laser weapons systems, multipurpose unmanned vehicles, and dozens of military aircraft, will be put on display as a demonstration of the country's evolving defense and aerospace industries.

In a first for a Korean head of state, President Moon Jae-in arrived at the exhibition Wednesday morning aboard a FA-50 light combat aircraft, which touched down at Seoul Air Base after departing from Suwon Air Base and flying over the Independence Hall in Cheonan, North Chungcheong, Seoul National Cemetery in Dongjak District, southern Seoul, and the War Memorial in Yongsan District, just north of the Han River.

Speaking at the opening celebration for the first time in four years, President Moon Jae-in said the biennial celebration paves the way for Korea to “forge international peace with a strong, future-oriented military founded on cutting-edge scientific technology.

“The defense industry is a central pillar that safeguards the lives of our people and a key strategic industry with high growth potential for the civilian sector as well,” Moon said as he encouraged industry officials present at the ceremony.

The president also pledged that domestic defense purchases would comprise 80 percent of total defense expenditures and that domestic military equipment and maintenance expenditures would increase four-fold by 2026 as the country moves to wean itself off of foreign military technical support.

The biennial ADEX is open to defense industry officials for all five days at Seoul Air Base from Tuesday to Saturday, with 440 defense companies from 22 countries participating in this year’s exhibition.

This year’s exhibition will be open to members of the general public on Saturday, as long as they can present a recent negative Covid-19 test or proof of completing their vaccination at least two weeks ago.

Korean companies at ADEX 2021 have been particularly keen on showcasing the industry’s progress in space and unmanned technologies, which the country’s military forces and weapons development programs have highlighted as emerging key defense capabilities.

One such company is Hanwha, which showcased all of its defense affiliates’ space-related capabilities together at ADEX. 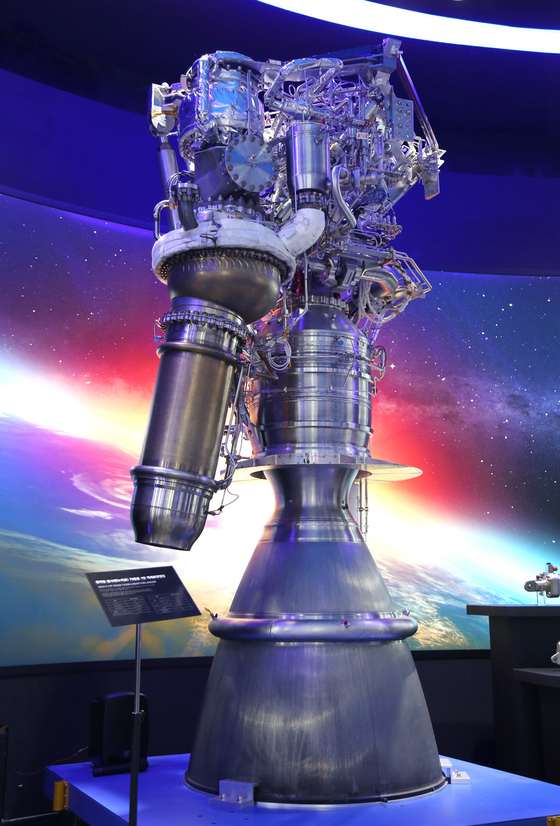 Hanwha Aerospace's 75-ton liquid rocket engine is on display, which is part of the Nuri satellite launch vehicle. [HANWHA AEROSPACE]


Of particular note is Hanwha Aerospace’s 75-ton liquid rocket engine, which is identical to the one to be used in the test of Korea’s first domestically-developed satellite launch vehicle, known as the Korean Satellite Launch Vehicle II, or Nuri, on Thursday.

Hanwha Aerospace is also displaying a low-Earth orbit satellite that enables data transmission that could potentially outstrip the fastest ground-based networks, along with a miniaturized synthetic aperture radar (SAR) satellite that weighs less than 100 kilograms (220 pounds) and features 1 meter (3.2 feet) per pixel ground imagery resolution, and an optical satellite with the highest resolution (0.3 meters per pixel) currently in operation in the world.

The products on display include a prototype of the company’s laser weapon, which targets projectiles like missiles or small, unmanned drones that can be difficult for conventional weapons to tackle; a tilt-rotor vertical take-off and landing aircraft which adapts civilian-purpose urban air mobility (UAM) technology; and a multi-purpose unmanned vehicle that relies on artificial intelligence to drive itself but can also be remotely controlled without a human driver aboard.

He also pledged that Hanwha would “continue to develop business models that fit the future, such as satellite services and urban air mobility projects, to grow into a global company.”

But Hanwha is not the only company that sees satellite technology as the future of Korea’s defense industry.

KAI’s display at the exhibition includes Korea’s second medium-sized satellite as well as the Nuri, both of whose development the company is overseeing. 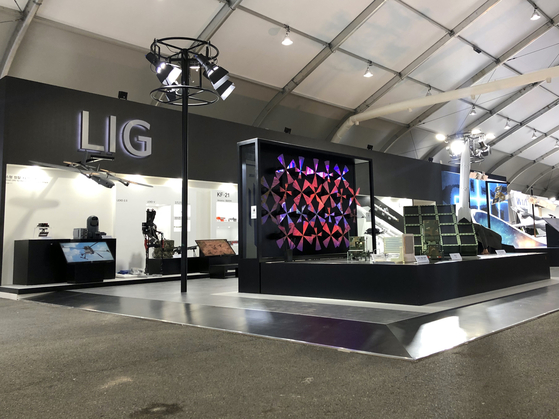 
The Nuri, a three-stage liquid fuel rocket, will lift off at 4 p.m. on Thursday from the Naro Space Center in Goheung, South Jeolla, carrying a 1.5-ton dummy payload.

If the launch is successful, the payload will enter into low orbit 600 to 800 kilometers above the Earth.

KAI also established Korea’s first civilian aerospace research center and a production infrastructure that can support the assembly of a wide range of satellites, large or miniaturized.

However, satellites are only a portion of the company’s display at ADEX, which includes fighter jets and manned-unmanned aerial vehicles.

The prototype of the company’s flagship achievement to date, the next-generation fighter jet KF-21 Boramae, will be on display, joined by the company’s soon-to-be-upgraded FA-50 Fighting Eagle light combat aircraft, which the company said it would upgrade with an unmanned version to serve as a “loyal wingman” to the KF-21.

A computer-generated video of the KF-21 flying in concert with a company of three unmanned FA-50 aircraft was released by the company to coincide with the start of ADEX.

Once Hanwha converts the currently manned FA-50 into an unmanned aircraft to accompany the KF-21, the South Korean Air Force will be able to add FA-50 aircraft to its planned KF-21 fleet at a comparatively low procurement and operating cost.

The upgrade to the FA-50 — expected to begin in 2022 — will also equip the aircraft with a multi-mode fire-control radar, a glass cockpit with a large area display, a helmet-mounted display, aerial refueling, electronic warfare systems and a digital flight control system with triple redundancy, converting the FA-50 into a “true multi-role combat aircraft,” according to KAI.

At ADEX, KAI also unveiled for the first time a concept model of a new electrically powered twin-seat basic training aircraft, dubbed the Black Kite, or "Sorigae," which will feature an electric propulsion system powering a total of four propellers mounted on the wings.

The company said in a press release that the new training aircraft will reduce operating costs, as well reduce the environmental impact of the Air Force’s training programs.

The Air Force plans to acquire more than 140 T-50 Golden Eagle trainer and FA-50 Fighting Eagle light combat aircraft in the near future and is planning to procure up to 120 KF-21 future fighter aircraft by 2032.

In another look at a future with unmanned aircraft, the company showcased a model of its Surion Marine Attack Helicopter (MAH), which is fitted with an enlarged stub wing-type structure mounting four canisters, each of which is designed to launch either a small unmanned aerial vehicle (UAV) or a loitering munition.

In tandem with satellite technologies being developed by other Korean companies, LIG-Nex1, which has been developing the country’s own version of the Global Positioning System (GPS) — named the Korea Positioning System, or KPS — highlighted some developments in the 3.7-trillion-won ($3.1 billion) project.

Development of the KPS will run from 2022 to 2035. Consisting of eight satellites, the KPS is expected to serve as a key infrastructure component in the fourth industrial revolution, marked by autonomous driving, urban air mobility, the internet of things and augmented reality.

In a press release timed with the opening of the exhibition, LIG-Nex1 said it has almost completed the development of an SAR system to be loaded on satellites, military satellite communication terminals, electronic optical devices and infrared sensors. 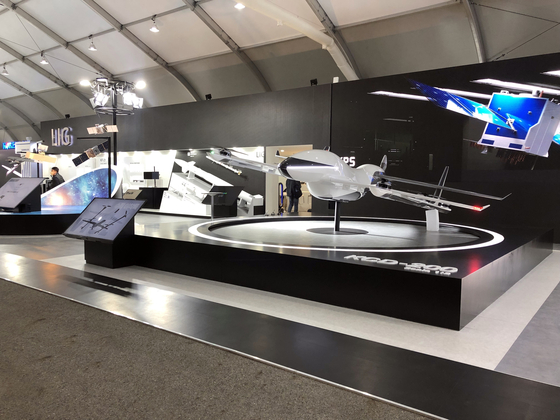 
The highlight of LIG-Nex1’s ADEX display, however, was the company’s hydrogen cell-fueled cargo drones which can carry loads weighing up to 200 kilograms. Eyeing both the civilian and military markets for its drone, the company said it envisions the drones as its entry into the UAM and personal air vehicle market.

Sharing the industry’s focus on unmanned technologies, Hyundai Rotem — which supplies the Army with remote operation-capable HR Sherpa vehicle, also on display at ADEX — unveiled its Daring Operations in Service and Search (DOSS) model for the first time at the exhibition, which the company said would serve as a signpost for future defense technologies. 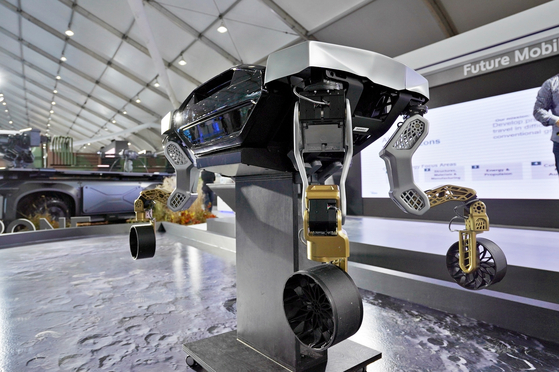 Equipped with four robotic legs and wheels, DOSS is not only capable of driving at high speeds over flat terrain, but also moving freely in rough terrain by using its legs.

DOSS can also be remotely or autonomously driven, the company said, allowing operation of the vehicle to be adjusted to the circumstances and the combat mission, including surveillance, border patrol and transportation of injured soldiers.

Hyundai Rotem also envisages civilian uses for the platform, including the transportation of goods in remote areas and firefighting efforts.

While the DOSS on display at ADEX is an unmanned model, the company said it will also manufacture a manned model that allows people to board.