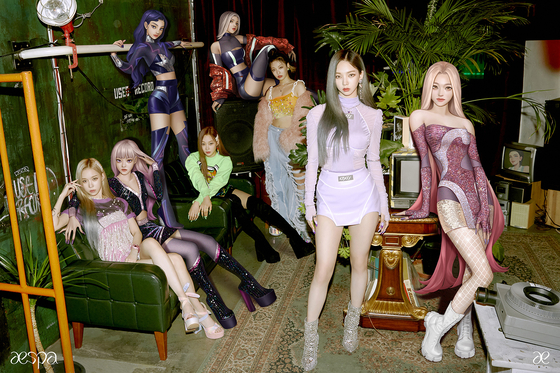 An image of girl group aespa, featuring all members, including the avatars. [SM ENTERTAINMENT]

"Black Mamba" had already set a record for the most viewed K-pop music video for a debuting band, hitting 21 million views within 24 hours of release.

"We are so happy to hear that the music video for 'Black Mamba' has surpassed 100 million views," the band said through a press release distributed by SM Entertainment.

According to a local consulting agency company specializing in the entertainment business, Reels Corporation, "Black Mamba" made it to major music charts in 95 countries around the world immediately following its release, as well as making it to the Billboard Global 100 chart three days after.

"We feel so proud to have set a good record with our debut track, and we sincerely thank every one of our fans who have given us love and support. We promise to be the aespa that gives good music and bright energy in 2021."

The group debuted last year with a unique theme of having each member connected to its own avatar in a fictional space — ae-Karina, ae-Giselle, ae-Winter and ae-Ningning. The agency explained that the name is short for “Avatar X Experience,” to evoke a theme of "meeting a new ego of oneself to experience a new world."