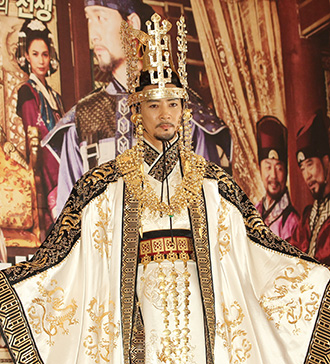 Just a day after his co-star Park Joo-mi was hospitalized because of a car crash, Choi Soo-jong hurt himself on the set of their drama in Gyeongju, North Gyeongsang.

While filming a riding scene for “A King’s Dream” on Wednesday, Choi fell off his horse and tore a ligament in his right shoulder.

Despite the injury, Choi is pressing ahead with the filming schedule.

“As soon as the accident happened, we took him to a hospital and he was diagnosed with a torn ligament,” Choi’s manager said yesterday. “But filming had to go on, and Choi went back to the set straightaway.”

Choi’s manager said the 50-year-old actor would have to refrain from vigorous action scenes “as he won’t be able to lift up a sword.”

The accident came as a surprise as Choi is an expert horseman, having starred in many period pieces.

Meanwhile, Park’s accident took place Tuesday night and she is waiting on test results to determine whether or not she can continue on the program.