Quintet subunit of ZE:A to accentuate sensitivities of the group

Quintet subunit of ZE:A to accentuate sensitivities of the group 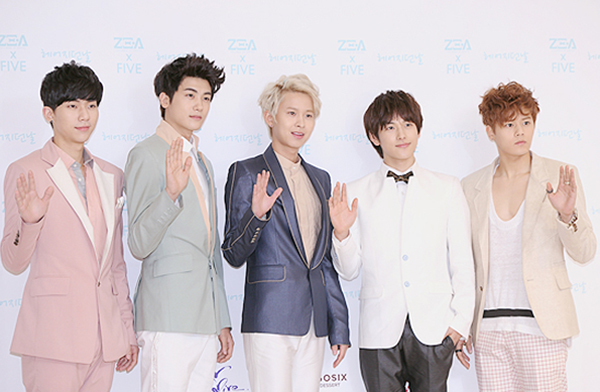 ZE:A-Five, a five-member subunit of nine-member ZE:A will have its first performance on cable network Mnet’s “M Countdown” tomorrow following its album release on Monday.

“ZE:A-Five will focus more on emotional aspect while ZE:A showed more masculine side and focused on performances,” said Ha Min-woo, during a press conference on Sunday.

In the new album “Voulez-vous,” the members plan to bring all emotions entailed from love. In a title track, “The Day We Broke Up,” was made in cooperation with music producer Brave Brothers and others.

“There have been always many boy bands, and since the trend is changing so fast, we don’t think that there is none we can call a rival,” said member Dong-jun.

“I think we have more competitiveness when we sing a song that goes well with the season, and we have lots of songs that match the warm spring season.”

Meanwhile, some members expressed mixed feelings toward other members of the original group.

“I’m very excited to perform as a member of a new unit group, but I also feel sorry for other members,” said Siwan “I was very thankful to have support from [other
members], and I’ll perform for ZE:A.”