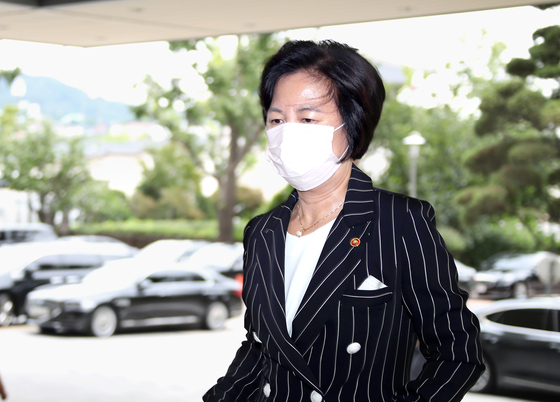 Justice Minister Choo Mi-ae arrives at the government complex in central Seoul on Friday to attend a cabinet meeting hosted by the prime minister. [YONHAP]


In the latest volley between ruling and opposition lawmakers over Justice Minister Choo Mi-ae's alleged abuse of power, ruling Democratic Party (DP) Rep. Hwang Hee revealed Saturday on Facebook the full name of the whistle-blower who accused Choo’s son of getting preferential treatment during his military service.

“It will be too soon to make conclusions whilst the investigation into the case is ongoing [...] but I see a need to commence a probe on Sergeant Hyun, whose whistleblowing has been the trigger of all this,” Hwang wrote on his Facebook account on Saturday. “Judging by what Hyun has said so far, one may think that he might not be acting alone. We need to find out if there were political forces behind his whistleblowing.”

Hwang used the full name of the former sergeant several times in his post, but deleted it a few hours after receiving hundreds of responses, many criticizing him for revealing the sergeant’s full name. Hwang replaced the full name mentions with “Sergeant Hyun.”

Article 12 of the act stipulates that “No person shall inform another person of the personal information about a whistleblower [...] or any fact from which one can readily infer that he/she is a whistleblower.”

Former members of the DP also expressed alarm over Hwang’s decision to reveal the name of the whistle-blower. Protection of whistle-blowers has been one of the key promises of the Moon Jae-in administration.

“A lawmaker should always remember that they represent the people first, regardless of their political leanings and which party they are associated with,” wrote former DP lawmaker Geum Tae-seop on Facebook on Saturday. “No circumstance therefore validates a lawmaker to publicly blame an individual [...] let alone insinuate that the individual acted with criminal intentions.”

“I apologize for causing trouble with my posting,” Hwang wrote on Facebook on Sunday afternoon. “I didn’t mean to pinpoint Hyun, I meant to emphasize that there may be a force behind him [...] It was not my intention to make Hyun appear like a criminal. I am sorry to the public and Hyun.”

Prosecutors have been probing Choo’s son since January, when opposition lawmakers filed a criminal complaint. The allegation was first brought to light during Choo’s confirmation hearing as justice minister at the National Assembly in December, when a lawmaker cited Hyun’s accusations.

Choo’s son, whose surname is Seo, served in the Korean Augmentation to The United States Army, or Katusa, for the 2nd Infantry Division of the U.S. 8th Army from November 2016 through August 2018.

Opposition PPP lawmakers, Hyun, and other whistle-blowers have alleged that Seo was let off the hook when he went AWOL in June 2017, taking twice-extended medical leave for knee surgery.

They claimed Seo broke rules in the process of obtaining his leave by calling his base to extend his leave rather than obtaining an additional permission from a military hospital. Anonymous whistle-blowers also claimed to media outlets that Choo, at the time chairwoman of the DP, or one of her aides called the military to ask for the extension.

Both Choo and her son have denied the allegations.

“I would like to apologize to the public for burdening them with additional concerns regarding my son’s military service, when they already have enough to worry about due to the Covid-19 pandemic,” Choo wrote. “I remained reticent until now so as to not influence the ongoing prosecution probe into the matter.”

“My son received surgery on his left knee before his military service,” Choo wrote. “He then received another surgery to his right knee during his service. He took a medical leave for that. The hospital said he needed at least three months of rest, but he went back into service within a month of his surgery. He finished his service. That is all there is to it. I don’t think that people can try to become ill on purpose while being in military service [...] I will continue to wait upon the results of the prosecution probe, which will determine the truth about the matter.”

As the probe has stretched into months, whistle-blowers in addition to Hyun have stepped forward, in some cases revealing their own names.

Retired Col. Lee Chul-won, former commander of the Army’s unit responsible for managing the Katusa program, became the first witness to publicly back allegations that military officials were pressured to give preferential treatment to Seo on Friday.

“When Seo was in boot camp, one of the staff officers reported to me that a request was made from outside to assign Seo to the Yongsan garrison,” Col. Lee said in a written statement Friday. “The staff officer rejected the request and explained the process of how Katusa soldiers were assigned to bases. [...] After receiving this report, I stressed to my staff officers that they must never accept any improper requests and warned them about various consequences.”

According to Col. Lee, the military also faced pressure to select Seo as one of interpreters for the 2018 PyeongChang Winter Olympics.