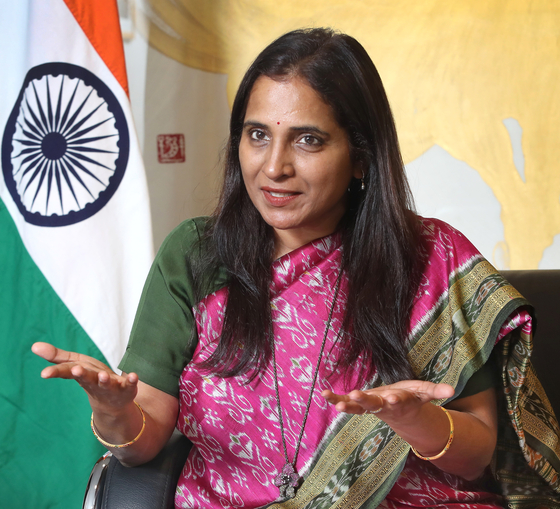 Ambassador of India to Korea Sripriya Ranganathan speaks with the Korea JoongAng Daily recently on India's participation in the Korean War, at the Embassy of India in Seoul. [PARK SANG-MOON]

The country provided medics to support UN forces during the war 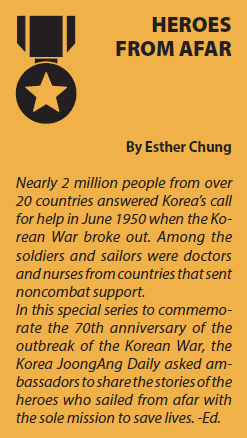 Shortly after a unit of Indian paratroopers and medics arrived to support United Nations-led forces 70 years ago, they earned a nickname that would stick for the remainder of the Korean War.

“Following the unit’s arrival in Busan on Nov. 20, [1950,] it was split into two echelons [and] the main column under Lt. Col. [A.G.] Rangaraj was placed in support of 27th British Commonwealth Brigade,” said Sripriya Ranganathan, ambassador of India to Korea, in a recent interview with the Korea JoongAng Daily.

Lt. Col. Rangaraj and his men joined the Commonwealth forces in Pyongyang on Dec. 4. They had hardly begun to unload and set up their equipment when they got the order to withdraw. Chinese and North Korean offensives were pushing the United Nations forces south.

All the medical equipment was to be blown up, so the opposing forces couldn’t put it to use.

Determined to not see the life-saving equipment go to waste so early in their mission, Lt. Col. Rangaraj was thinking hard when he noticed an abandoned steam locomotive sitting on the tracks.

“Unusually for an army unit, [it] happened to have an engine driver as part of its complement,” said Ambassador Ranganathan. “A soft-spoken sepoy [a term for an Indian infantryman], who had once been an engine assistant on Indian Railways, examined the engine and reported to the Commanding Officer that ‘given fuel and considerable assistance from God, it could be coaxed into motion.’”

The men got to work. They melted snow, and standing side by side to form a human chain, delivered the water into the train in buckets.

Their ingenuity paid off.

Just minutes before the U.S. engineers blew up the last bridge across the Taedong River, the locomotive chugged past them, with all the equipment and men aboard. 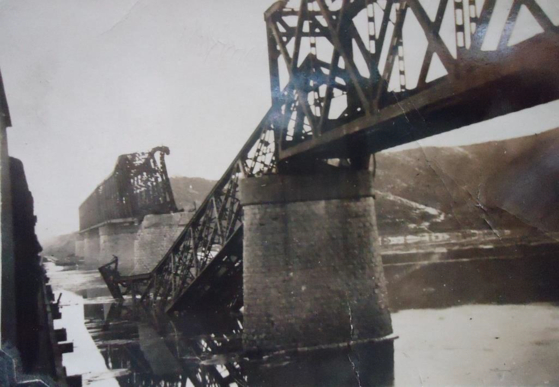 A railway bridge that was blown up just after India's paratroopers and medics crossed it on a steam locomotive in December 1950. [EMBASSY OF INDIA IN KOREA] 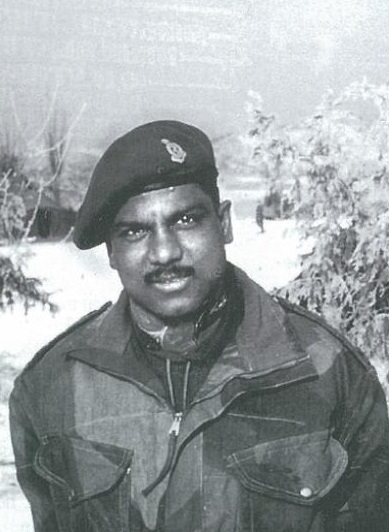 Lt. Col. A.G. Rangaraj. Photo has been provided at courtesy of Ministry of Patriots and Veterans Affairs Korea. [YONHAP]

India was one of six nations that committed medics on the ground to support the South during the Korean War (1950-53).

“In the 1950s, India was a young democracy, which had consciously chosen the path of non-alignment,” said Ambassador Ranganathan. “The decision to dispatch a medical unit was also a result of the same thought process.”

The 60th Parachute Field Ambulance, which was a unit set up in India in August 1942 and had distinguished itself during World War II, departed from Calcutta , India, on Nov. 7, 1950, and arrived in Busan on Nov. 20. Split into two, the second part of the unit commanded by Maj. N.B. Banerjee was sent to Daegu, where it established a field hospital.

“The Daegu echelon provided training to Korean combat medics, treated casualties evacuated from the frontlines and served as a relief center for frontline troops,” Ranganathan said.

In all, 627 medics from the 60th Parachute Field Ambulance treated nearly 225,000 soldiers and civilians throughout the course of the war, according to the Indian Embassy in Korea.

Many medics had combat experience in World War II and were trained paratroopers, but they did not take part in active combat.

Lt. Col. Rangaraj and his men took part in Operation Tomahawk, an airborne military mission led by the U.S. 187th Infantry Regiment in Paju, Gyeonggi, on March 23, 1951. The operation was part of Operation Courageous, and the paratroopers were dropped from the sky north of the frontlines to try to trap the Chinese and North Korean forces between the Imjin and Han rivers. One of the largest airborne operations during the war, the battle resulted in a UN victory.

“There were numerous American casualties during that landing, and the small but committed medical unit carried out 103 operations, saving about 50 lives,” said Ranganathan. 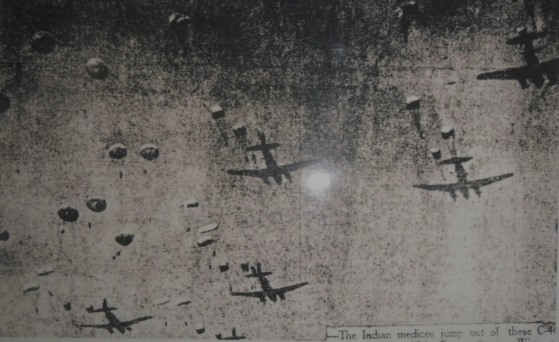 Paratroopers being dropped during Operation Tomahawk on March 23, 1951. [EMBASSY OF INDIA IN KOREA]

During Operation Commando, an offensive action by the UN forces from Oct. 3 to 12, 1951, the Indian medics treated more than half of the wounded soldiers from the 1st Commonwealth Division, according to the records at Korea’s Ministry of Patriots and Veterans Affairs.


Towards the end of the war, the Indians would see their role evolve once more.

“Not all prisoners of war [POWs] wanted to go back to their own countries,” recalled Col. Kanwar Sain Bakshi, who came to Korea in 1953 to serve as part of the Custodian Force of India, which helped facilitate the POW exchanges.

A survey conducted by the UN Command at the time showed that only 73,000 of around 170,000 POWs wished to return home.

“The Indian delegation worked actively to forge consensus at the UN General Assembly to reconcile the U.S. approach of ‘non-forcible repatriation’ and the Sino-Russian demand for ‘all-for-all’ exchange of POWs, with every prisoner required to return to his home country,” said Ranganathan. “The Indian proposal of a commission to take custody of all non-repatriated prisoners after the armistice and decide on their final disposition and to create a Neutral Nations Repatriation Commission [NNRC] to take custody of prisoners was supported by the Commonwealth countries and eventually accepted by both camps.”

India ended up leading the NNRC, which consisted of Sweden, Switzerland, Poland and Czechoslovakia as member nations. India appointed Lt. Gen. K.S. Thimmayya as the chair of the commission.

To assist the work of the commission, India dispatched the Custodian Force of India, consisting of five infantry battalions tasked with keeping the POWs in custody and enabling them to decide on their repatriation destinations without coercion. Around 5,000 soldiers were part of the Custodian Force of India, according to the Indian Embassy in Seoul.

The force was commanded by Gen. S.P.P. Thorat, who was awarded the Distinguished Service Order in his previous service in Myanmar (known as Burma at the time) during World War II.

“India occupied a leading position among the countries which were determined to keep clear of both blocs […] and did not join any side,” said Dr. Y.S.P. Thorat, son of Gen. Thorat, in a video call with the embassy last month. “It was this attitude which helped it to play a major role in the United Nations in regard to peacekeeping.”

With the armistice signed in 1953 and the POWs exchanged, the last of the Indian soldiers departed Korea in February 1954. Three had given their lives and 23 were wounded, according to records at Korea’s Ministry of Patriots and Veterans Affairs. 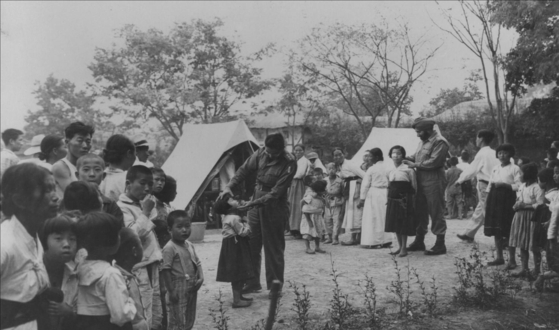 At India's medical detachment in Daegu. The field hospital is said to have treated some 300 patients daily, according to records at the Embassy of India in Korea. [EMBASSY OF INDIA IN KOREA]

Many, like Gen. Thorat, had risked their lives to defend Korea. When he answered the call from Korea, he was leaving behind his wife, two daughters and a 6-year-old son.


“My earliest recollection about the Korean War is the day [my father] was leaving,” said Dr. Thorat. “I remember I was called and he said, ‘You know you are now the man in the house. I am going away to Korea, and you have to look after your mother and two sisters. Will you look after them till I come back?’ I said yes, of course.”

Col. M.K. Unni Nayar had left behind his wife and a 2-year-old daughter when he came to Korea as a war correspondent and an alternative delegate to the UN Commission. He was in Korea earlier than most Indian soldiers, and was covering the North Korean offensives towards Busan in August 1950 when his vehicle hit a landmine. He died on the battlefield and was buried in Daegu.

His wife, who visited his grave in Daegu several times after that, was buried beside her husband after she died in 2011. 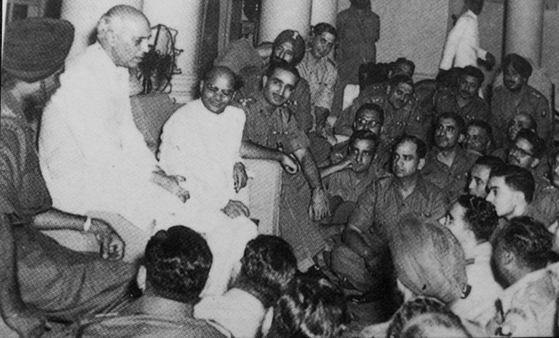 India's then-Prime Minister Jawaharlal Nehru speaking to members of the 60th Parachute Field Ambulance before their departure to Korea. [EMBASSY OF INDIA IN KOREA] 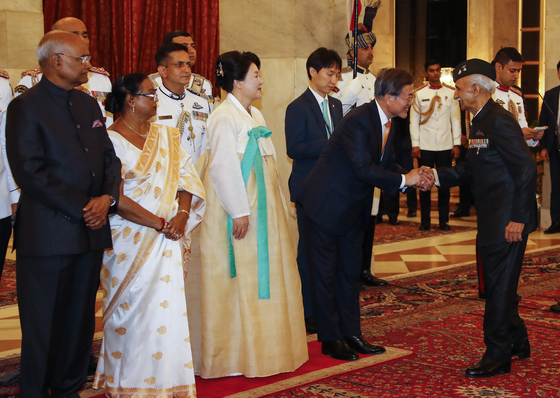 Korea's President Moon Jae-in meets with an Indian veteran of the Korean War during his visit to India in July 2018. [JOINT PRESS CORPS OF BLUE HOUSE]

Recent efforts have been taking place in New Delhi to remember the veterans.


“As a joint initiative of the Indian and Korean governments, a memorial is being built in one of the most prominent places in the capital city of New Delhi to commemorate the role of the Indian armed forces in the Korean War,” said Ambassador Ranganathan. “I am confident that this memorial will help immensely in spreading more awareness of the role played by Indian troops both in humanitarian assistance and in peace building during the Korean War.”

Though seven decades have passed since the outbreak of the war, Korea still holds a special place in the old veterans’ hearts, said Col. Bakshi.

“I have a very emotional attachment to Korea,” he said. “Korea was very different at the time, because it was just trying to recover from being a colony of Japan.”

The colonel said his experiences of weathering temperatures as far below freezing and navigating hazardous mud pools on the road during the war often overlap with the image of developed Korea today.

“Today, South Korea is prosperous, it is developed and it is in a position to help other nations, which they have been doing, there is no doubt about that,” he said. “I’m not sure if we have contributed much to the development, it is [the work of] the people of Korea, and of course their other allies who have helped them. I am grateful to see where the two nations are today in terms of their economic relations, for otherwise I would not own my car now, a very good one from Korea.” 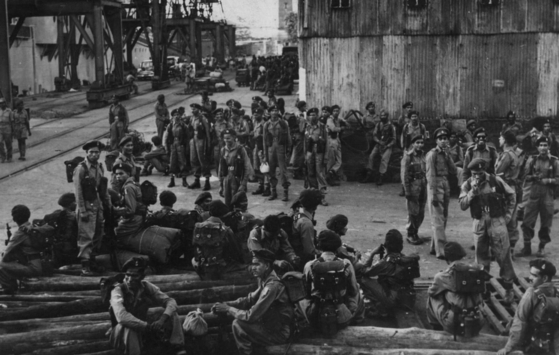 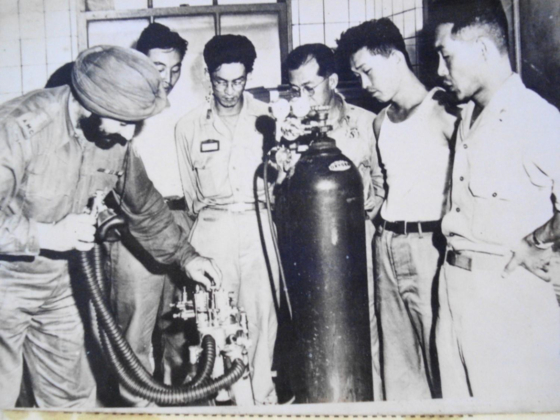 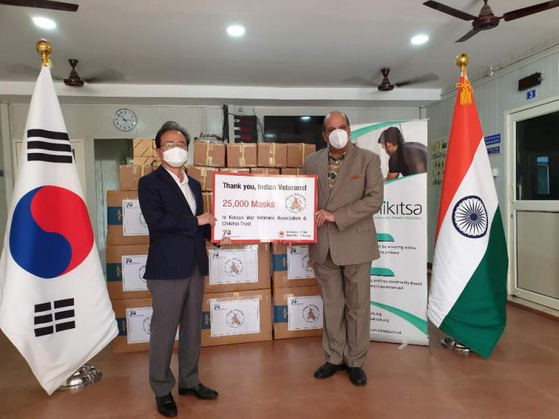 The Korean government delivers 25,000 masks to veterans in India in June 2020. The photo has been provided at the courtesy of Embassy of Korea in India. [YONHAP] 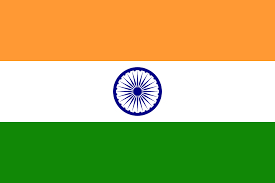 India
At the outbreak of the Korean War (1950-1953), India dispatched 627 medics and paratroopers of the 60th Parachute Field Ambulance. They trained Korean combat medics and treated soldiers evacuated from the frontlines. In all, they treated almost 225,000 patients during the course of the war, according to the Embassy of India in Korea.
Near the end of the war, India chaired the Neutral Nations Repatriation Commission, created to facilitate exchanges of prisoners of war (POWs). In this process, India dispatched its Custodian Force of India to Korea, consisting of some 5,000 men, according to the Indian Embassy in Korea, to help manage the POW camps.
The last of the Indian soldiers left Korea in February 1954. Of the Indian contingent, three died and 23 were wounded, according to Korea's Ministry of Patriots and Veterans Affairs.